pic: Award Trophies Made By Mr. Bertucci For The 2009 Robo Showdown During NI Week 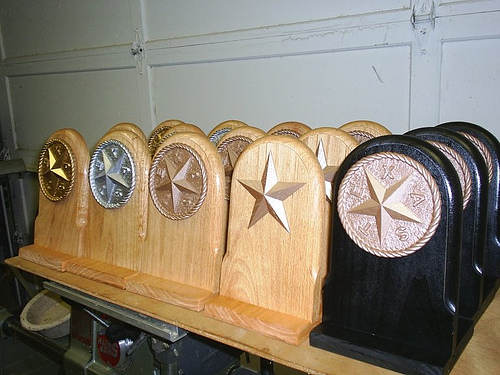 Mr. Tony Bertucci, lead mentor for FRC 418, LASA Robotics/Purple Haze, made the trophies for the judged awards and the robot competition for the Robo Showdown during NI Week.

These were the awards created for the 2009 Robo Showdown that was to be a part of the excellent upcoming event, NI Week. I think they turned out nice. Beneath the stars we would have added an engraved plate with the event name, the date, and the name of the award.

Why do some have decorations around the stars and some don’t?

Why do some have decorations around the stars and some don’t?

Mr. Bertucci and I met a couple of times to discuss the design of the trophies and the awards the committee had decided on. We wanted the trophies for the winning alliance and runners-up, obviously. Those are the gold and silver. Then we wanted judged awards by the judges. I had also suggested sponsor awards (NI) so - we are looking at the different areas of judging regarding why some have stars encircled and some don’t, probably. Bertucci had freedom to do what he felt was a good fit for the awards. The stars were cast specifically for this project. Perhaps Bertucci can further explain what he decided and/or why.