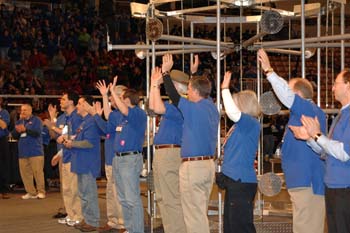 The judges from the BAE Systems Granite State Regional signing applause for rookie team 1991 after they won all three Rookie Awards (they were the only rookie team there).

Many team members from 1991 came from a deaf school, so they have been signing applause in front of us all day. After they announced their name for winning the Rookie Inspiration Award we, instead of clapping, signed applause.

Gradually, the stadium grew quiet and when you looked around, everyone was signing applause!

Definately one of the most moving FIRST experiences of my life.
I’ll never forget it.

that was pretty touching. they deserved those awards they had a great sprit all weekend.

Thank you very much for posting this image. Everyone on our team was too busy to take a picture of this, and it was very awe-inspiring, especially for our team. It was amazing to see everyone in the crowd signing applause. Being on a deaf team has really inspired me and has make me think differently of the world…

We really enjoyed seeing the crowd signing in applause.