pic: Balance ALL the robots! 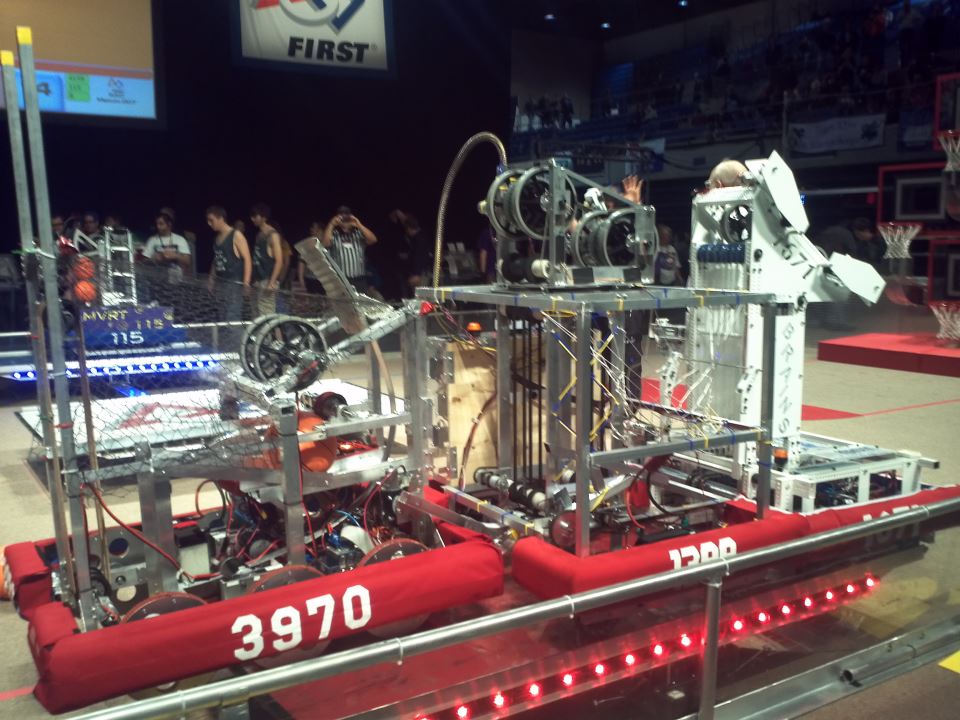 First and only triple bot balance at the Sacramento Regional in Quarters 3 Match 2. Also made for the highest score at the regional with 78 points for the Red alliance. Special thanks to 1388 and 3970 for being great alliance partners. See you at CVR.
steelerborn March 19, 2012, 1:46pm #2

That was the most exciting part of the whole regional the stands went nuts! It was a lot of fun to be able to pick 3970 Duncan Dynamics as our first pick, they are very close to 1671 and it was fun to help them along with anything they needed. Being the highest rookie seed and winning the rookie inspiration award was an amazing feat, I can’t wait to work with those kids again they are truly a great team. And 1388 performed very well, writing brand new autonomous code earlier on Friday to “feed” 1671 one of their extra basketballs so we could score three balls, and if I recall those extra six points gave us the win. It was really great to be able to use that code again in the elimination rounds, that 30 point autonomous was well worth it.

Can’t wait to compete at CVR with both of these bots again, and hopefully we will take home the win this time

Also a congrats to 1678,971,and 3189. 971 has an amazing bot and it was an honor to play with previous world champs. 1678 was right next to us in the pit and a lot of our team members became very close, their bot was elegant and simple rolled up in a lethal combination, it would have been fun to compete against you guys in the finals. It just reminds me that the point of FIRST is not all about the robot, but is about building connections with other people interested in science and engineering. Even though 1671 didn’t win the regional I think we showed people that we can perform very well in competition, and hopefully get some better name recognition, Go Buchanan Bird Brains!

kudos for pulling a non-stacked triple with a long bot… all the triples I have seen had either all wide bots or used piggyback balancing (ala 1501).

That’s incredible! I wish I would have seen it happen. Having two long robots seems like quite the challenge. Congrats on actually pulling it off!

There is video of it on our YouTube channel.

This is one of those moments where coopertition/gracious professionalism kicks in. We were against this alliance in that match and I have to say it sucks to have lost and been eliminated, but I’m happy to say we were in the match where the only triple bot balance was achieved at the Sacramento Regional.