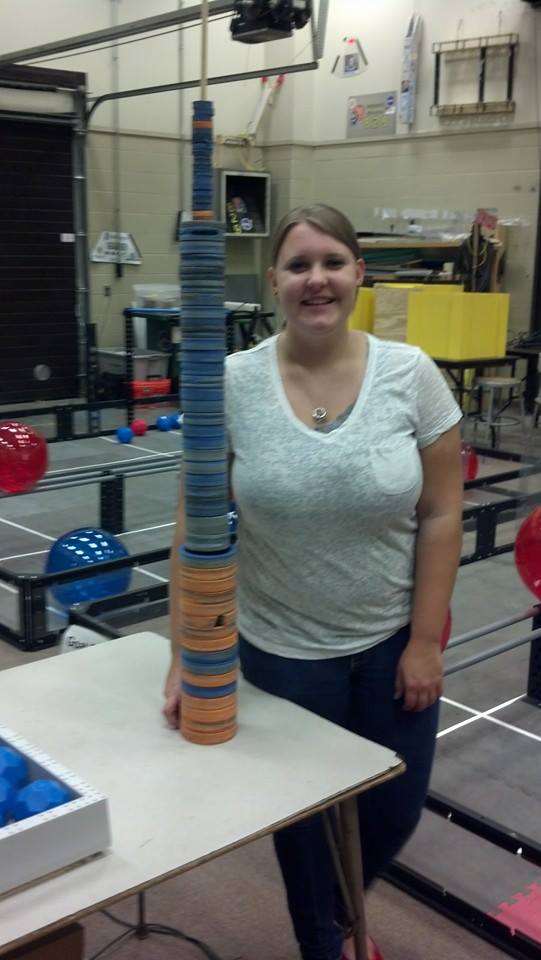 Our collection of used shooter and transport wheels from last years game, not including the ones still on the robot.
CD's Unofficial Caption Contest #835
yash101 November 10, 2013, 12:00pm #2

That’s what I call a collection! Our shooter wheels were similar and they kept getting grazed so we probably went through at least ten of them! Not as impressive of a stack as you have, but still pretty harsh on the resources. I wonder how they mass produce some of these products to allow teams to order many of these!

Out of curiosity, did you guys try out a different wheel? I know CD has had this discussion before, but a lot of teams had success away from the “poverty wheels” with polyurethane wheels.

I wanted to change the wheels because our shooter was having some problems, but on our team, we have conflicts all the time. We typically don’t try much new.

Out of curiosity, did you guys try out a different wheel? I know CD has had this discussion before, but a lot of teams had success away from the “poverty wheels” with polyurethane wheels.

We have a similar collection as 829. Almost enough for a poker set!

Our team got to a point where our shooter worked great and while many teams in our area worked on more reliable wheels between regionals and Champs we instead purchased another order and focused our efforts in improving other areas of our robot (mainly our climber). For a day of competition at an off-season event (10 matches) we would change our first of 3 wheels twice and the other two during lunch going into eliminations. This was with shooting 19-24 frisbees a match so it wasn’t horrible to change the wheels.

Not the best decision from a financial perspective for most teams but for us it was worth it. We made a large purchase mid build season, a small order going into Champs, and another going into IRI. During practice we ran wheels as low as we could go with used wheels and noted that our shot inconsistency was due to the wheels.

We used the green bane bots wheels and typically got about 1.5 competitions out of them before we noticed significant effect on our shots.