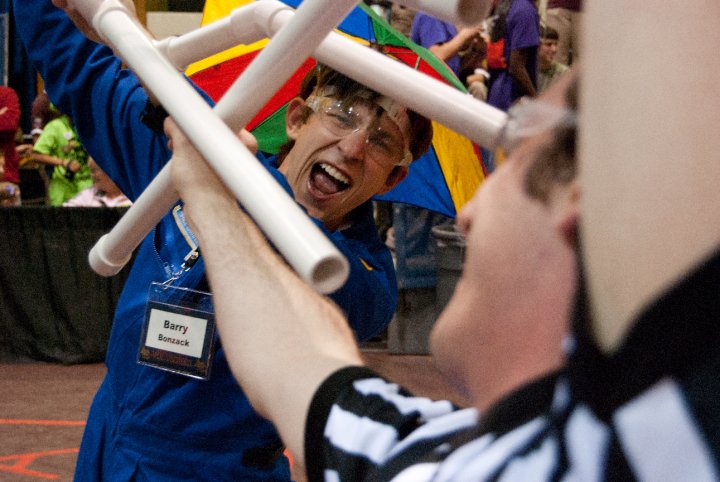 With the several dancing breaks alloted at the Philadelphia Regional this year, it isn’t hard to imagine that a referee and an announcer will get bored and the result will be catastrophic. What do you expect? Here are Barry Bonzack and Mike Rizzo showing you the true means to place the ball back on the ball return. This is a cool picture and was a pretty fun moment at the regional. Enjoy!

At least they are wearing their safety glasses.

I don’t know how many teams talked about the proper use of tridents and the potential opportunities for accidents if they were used in horseplay. Our team did. This would make an excellent poster to put up in a shop for what not to do with a trident.

Call me the trident party pooper.

Kids, these are trained professionals. Don’t try this at home.

(There, that should cover Jane’s concerns and legal issues.)

Kids, these are trained professionals. Don’t try this at home.

Trained in what, exactly?

I was standing right next to Barry and Mike when this picture was taken. It was just a staged photo - no tridents, MCs, announcers, small children, robots, or animals were harmed in the making.

It was just a staged photo - no tridents, MCs, announcers, small children, robots, or animals were harmed in the making.

Sorry, I’m taking a hard line here and I realize it.

No one in a referee shirt at a sports competition should participate in an act or photo opportunity that promotes dangerous activity. It doesn’t matter to me that there is a dance break and the emcee/announcer and refs are bored. If you want to have a photo opportunity promoting horseplay, don’t involve referees. That’s just asking for trouble.

Here’s the deal from my perspective - there is a certain element of trust that the GDC shares with the FRC community. They, of all people, know that when they create a game challenge that involves equipment and game pieces or elements, that there will be people who have access to those and will make the choice whether to use their time with them wisely or in stupid fashions. We see plenty of photos of emcees (particularly) horsing around during down times or when introducing the teams. Again, there is that element of trust involved that those who are helping to showcase the FRC events, are keeping it real and using some common sense while they entertain. When referees get involved in the entertainment aspect of the competition, they have to use even more common sense.

A five year old that attends the competition is going to be fascinated with the tridents. Small children make weapons out of everything: sticks, brooms, flashlights. Imagine their delight at seeing the wonder of a trident. They aren’t going to understand - staged. Neither is someone far away who is seeing a photo of a popular role model and a referee using the tridents as weapons.

Sorry - poor use of down time as role models and showmen.

No one in a referee shirt at a sports competition should participate in an act or photo opportunity that promotes dangerous activity.

But you must understand Jane, Barry’s middle name is Danger. Barry “Danger” Bohnsack.

On top of that, someone should let him know opening an umbrella inside is like 7 years bad luck.

But you must understand Jane, Barry’s middle name is Danger. Barry “Danger” Bohnsack.

On top of that, someone should let him know opening an umbrella inside is like 7 years bad luck.

How many years does a very large orange one get you?

Ooooh! Caption: Clearly the annoyance of ignorant FIRSTers mixing up judges and refs got to these two, and they decided to settle it once and for all. Only one may survive…

Ha, thanks for posting this moment, Tom is an excellent photographer. It was great to hang out with my friends up North like Mike who I don’t get to see often. We saw two extra tridents off to the side during lunch, and thought we’d get a few chuckles out of the volunteers that hadn’t gone to eat yet. Perhaps this would have been better taken fully after the event was over, or in the comfort of our own homes, I’d truly be sorry if someone were harmed because of witnessing my antics.

Philadelphia was a great event with lots of awesome people, I hope I’ll be able to return in the not too distant future.