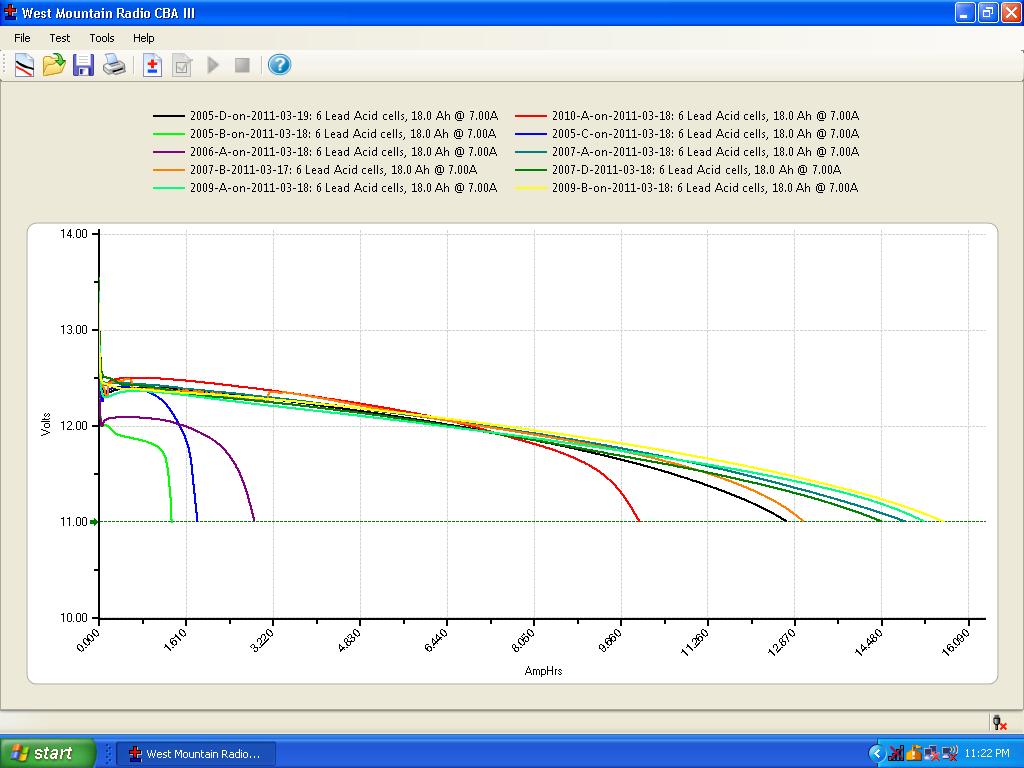 A summary plot of Team 1519’s battery tests in the 2011 build season, which did not include tests of our then-new 2011 batteries.

This plots shows that “new” batteries were giving a range of about 14Ah to 16Ah with our test methodology.

To understand the plot, we give each battery an identifier (e.g. 2010-A indicating the year of purchase and a letter for the year). The plots are labeled with the battery name and the date of the test.

This plot is made from a West Mountain Radio CBA III battery tester, at a constant discharge rate of 7.0A down to 11.0 volts.

So, the moral of the story is that old batteries can be really dead - but a few could still be good? It also seems that there is a sharp difference between “good” and “bad” batteries, and it will be obvious after using it in a robot for just a minute. I’d be curious to know where the rest of the 2006 batteries fall in on the scale. Were they already deemed bad and discarded?

I’d be curious to know where the rest of the 2006 batteries fall in on the scale. Were they already deemed bad and discarded?

For what it’s worth, our battery testing for the 2013 season is ongoing, and we still have one 2005 battery (our rookie year) that is hanging in there, although we’ve had to dispose of our other remaining 2005 battery and one of the 2007 ones. It really makes me wonder what specific events in these batteries histories have led to early deaths on some, yet long lifetimes on others – we’ve generally used them all about the same as one another. I suppose maybe some of them have suffered from isolated instances of rough handling leading to earlier deaths.

Thanks for sharing Coach Streeter!