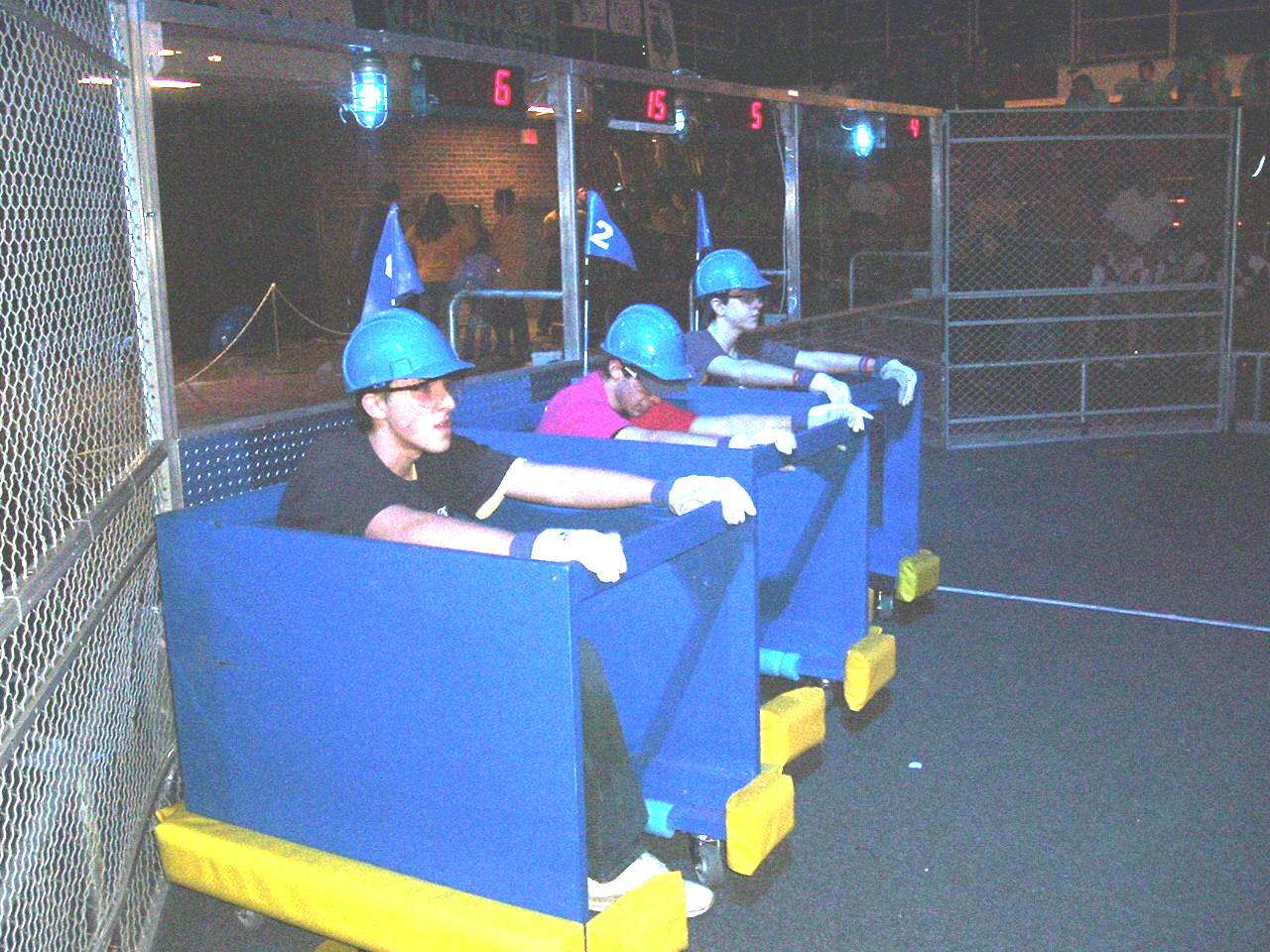 The winning alliance in Air Superiority, of course. WPI Battlecry 9 had a lunchtime game with the Robocoaches driving the kickoff robot boxes and hurdling the trackballs. These robots are a lot harder to drive than you think - there were several top-heavy tumbles, not that the Refs and field crew, ahem, helped much.

Thanks to our alliance partners team 555 and team 172 for a good run in the finals.

Sorry about the quality of the photo – it was shot in the pre-game blue light and I had to brighten it in the computer to even see anything. Next year I’m bringing a flashlight!

That’s awesome! Looks much more difficult than a joystick.

I’ve got more photos of B_Dubbs hurdling, but somehow I can’t load them here. I’ll get them onto our website.

Looks much more difficult than a joystick.

They didn’t have those hard-hats on for beauty. By the 2nd or 3rd round it was discovered it was easier to turn around and “drive” backwards. One driver thought pushing off with your feet would be even faster – pushed himself right over. The refs were following the 80" rule and flagging the tipped robots.

The refs were also on the field, holding back robots that didn’t have their hard-hats on, volley-balling the trackballs backwards if they got hurdled, being a general bother, and having a good time. If a team didn’t show, some of the refs tried their hand at driving.

I’m glad this was a part of the show. I hope they have the box-bots back next year.

It was as entertaining (if not MORE entertaining) than watching the robots themselves play Overdrive!

This was probably the most fun I’ve ever had as a referee in FIRST. Don’t worry, we counted all of the hurdled trackballs we “volleyball-ed” back over in the first few matches. The only team we really gave a hard time was 40, and thats because they did the same to us refs when we were playing a match before the real air superiority matches started. We just couldn’t let them get away with making us look bad. They were great sports about it too (thanks guys).

After reffing on the field and having to avoid the “bots” and balls as the flew by, it really makes me appreciate the remote-disable feature we have with the arena controls, I don’t think running up to a real robot and holding it still for 10 seconds would work as well as it does with the human robots.

Seriously though, loads of fun (both to ref and play) and very entertaining. Perhaps this should be a new BattleCry tradition.

By the way, I think 172 wins the “speedster” award. All he did was run laps each match.