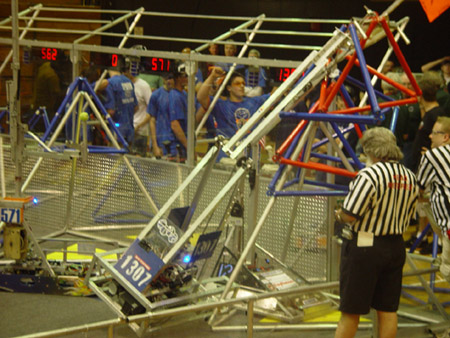 Both teams were fighting to stack the last tetra on the top in the last few seconds of the match. During the struggle, the blue tetra became un-seated and descored, yet none of us knew who was to blame. So we decided to just put the blue tetra back on. ALthough, the red alliance won anyways, so it didnt make much of a difference.

So, if you want to fight over a goal, make it obvious who the refs should blame for a de-score

EDIT: This was either the replay of quarterfinal 1-1, or 1-2. I dont remember which, but I know it was a replayed match.