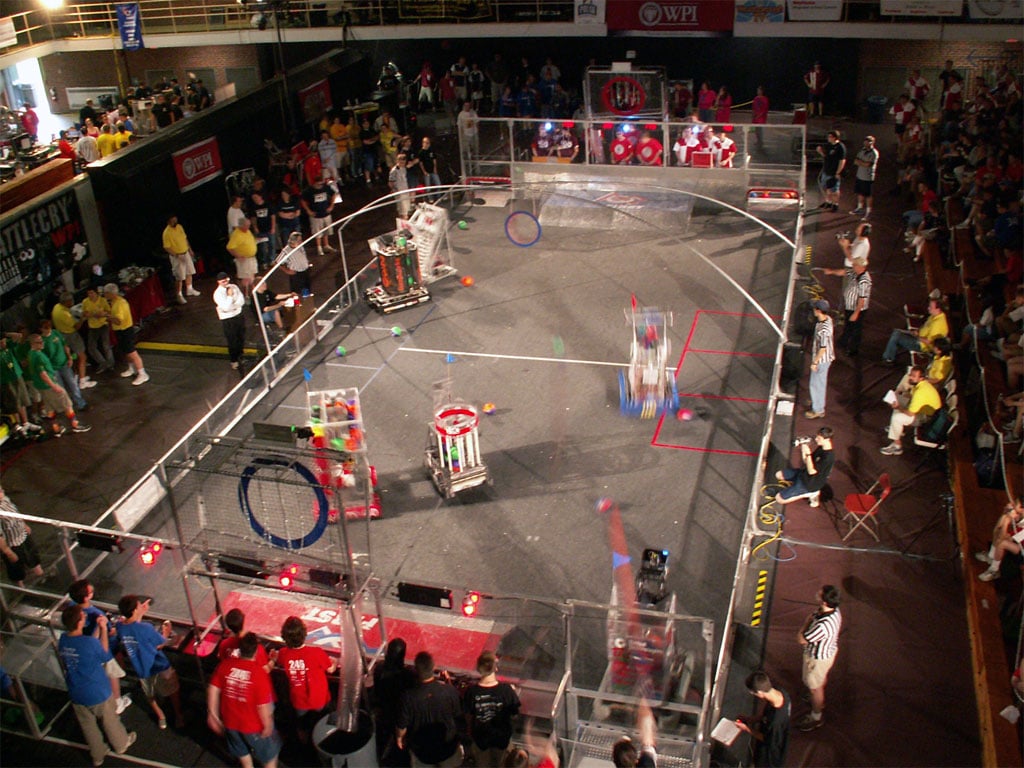 A shot of the modified Aim High field used for BattleCry@WPI 7, taken from the vantage point of the wide-angle cameraman. This clearly shows the added “Toggle Goal” in the middle of the field (the indicator lights and real-time scorer for the toggle are located directly to the left of Andy Grady).

Sorry for the quality, but due to the lighting a long exposure was used, and some of the robots became blurred. Also, due to the vast number of people in this picture, I wasn’t able to tag nearly as many as I would’ve liked, so if you see yourself or someone you know in this picture, please add a tag.

How much was the center of the field goal? Question, in years past and possibly the future will there be a addition to the game like you have this year.

WPI always has a game change.

as for how it worked the center goal was a toggle hit it once and you gain ownership. For the other team to take ownership they have to hit it twice. once to bring it back neutral and then once to make it theirs. Having ownership of the center gave a 10 pt bonus at the end of the round.

How much was the center of the field goal? Question, in years past and possibly the future will there be a addition to the game like you have this year.

As Greg said, the middle Toggle Goal was worth 10 points to the team that had it toggled to their color at the end of the match (it was a three position toggle, so if it was toggled to blue, the first hit on the red side would make it neutral, and the second hit would toggle it to red). There is some more information in the page from the BattleCry program that is posted here.

WPI has had a long history of modifying games for BattleCry, although it’s only done to fix a perceived flaw in game-play (we would never make a change just for the sake of change). Perhaps the most drastic change was for the 2001 game, in which the 4v0 game was modified into a 2v2 game, and a second bridge was added to the middle of the field. On a smaller scale, for last year’s BattleCry, the points for having robots in the home zone were modified to be 5, 10, and 25 points for one, two, or three robots (sound familiar?).

I loved that new center goal!

It adds a whole new level of scoring in the game, which IMHO should have been there from the start of the season. It brings back fond memories of the 2004 game, in which we had more ways to score than you could imagine. (Well not literarily, but you had a mobile goal, a stationary goal, the hanging bar, AND capping, all of which are radically different.)

Hmm, I almost re-modified that field when I got slightly overzealous on defense…

Sorry about that :o

I strongly urge ALL off-season events to add this element. It everyone the ability to deepen their strategies in a game that is pretty straightforward.

I just wish there will be something cool like that at the Ruckus.

Was i bold enough to the planning commitee?

you are so right. with out that new game twist we would not have done half as well as we did. I think it added quite a bit to the game personally.

Originally, I thought no one was going to even bother hitting it considering the lack of green target and whatnot.

I never expected teams would be fighting over it in the finals.

One benefit to the center goal was that teams had to keep an eye on the back-bot which could score that goal. It helped with some of the overzealous defense that was seen in this year’s game. Usually, a bot had to go back and harass the back-bot if it was trying to score the new goal. This eliminated some of the 3 on 2 that caused much of the damaging contact.

It also added a second “big finish” to the game. More than once the center goal was swung from one alliance to the other in the last 10 seconds of the match.