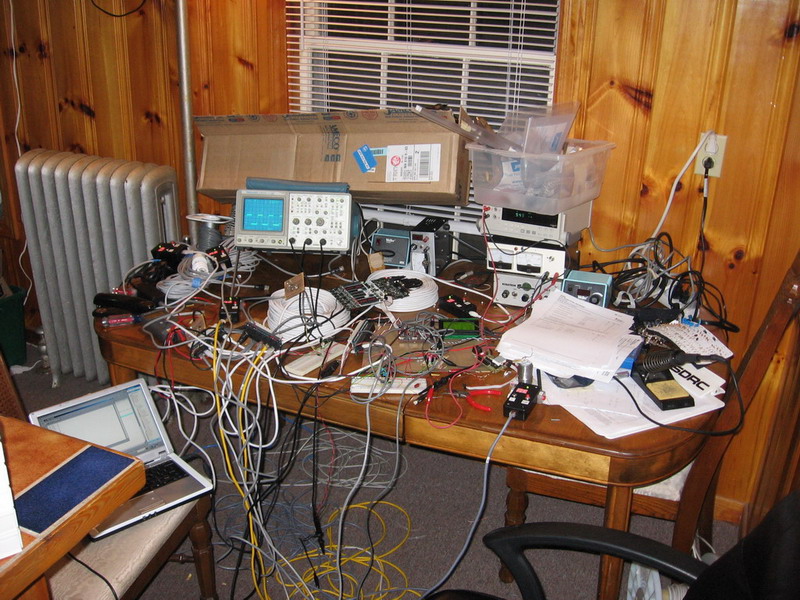 Let me add to Brian’s signature a little:

My work habits and cleanliness represent my personal habits only, and do not represent the habits or cleanliness of either my team, Team 190, nor its primary sponsor, Worcester Polytechnic Institute.

It looks like a clicker system, I see about 6 total boxes which gives one for each goal.

Interesting…looks to be a little bit more sophisticated than the system Mike Walker developed for Mission Mayhem.

I hope we’ll find some interesting details (and pictures–can’t forget pictures!) in the coming week or so.

I like the design of the interface so far. Everything appears to be RJ-45 jacks and Ethernet patch cables. The interface of the future?

Cool, I’m glad to see others developing RTS for offseasons too. If you want to use the software we used for Mission Mayhem (it was designed to use keypresses as inputs… originally we planned to use the I-Pac Keyboard Encoder, but unfortunatly didn’t know for sure we were doing it till too late to have shipped) However, the software is free for your use if you’d like, just PM me… I’ve got to put like a half hour into it to fix 2 minor bugs we found in the weekend and it’s all yours if you’d like, the screenshots are on CD-Media from last week.

I don’t think you can really do an offseason well this year without some form of RTS, the way those balls are flying there’s no way to visually see the score like previous years. I’m curious to see what people that spend more than a few hours designing it come up with

Best of luck with it, can’t wait to see your final product!

Now that BattleCry is finally over, and I’ve regained enough sleep, and the clicker’s actually worked, I have time to reply to this thread.

Those were indeed the real time scoring system which I developed for BattleCry (with the assistance of a few others). Each clicker box has an Atmel Atmega8 microcontroller, along with the 2-digit 7-segment LED display, 3 buttons, a RJ-45 connector and a 4 position dip switch to set its position. There is also a master device with an Atmel Atmega128 which sends out serial port data, displays the info on a 4x20 LCD, and allows manual clearing and enabling/disabling. The master box does I2C send and receive requests to each individual clicker box over standard twisted pair CAT-5 cables, although there is a set of TI P82B96P I2C buffers which buffer the I2C signal over the long distances to each end of the field to 10V and at 20mA (set by using smaller pull-up resistances than the I2C spec of 3mA). At each end of the field, there is a break out box with 4 RJ-45 ports for master connection and 3 slave connections with a linear regulator to provide 5v to each box (trying to keep costs down…) and another TI P82B96P. The “local” I2C busses are actually run out of spec as well - at about 10mA to allow for longer cables on the salves without errors. We had a set of custom PCB’s run for each slave, although all through-hole components were used to save time in assembly (and because we had the space). The master box spits out serial data which is read in by an add-on to the scoring system we used. Another add-on to the scoring system determines the winner of autonomous mode and sends the command to yet another add-on which controlled the field. I’ll post more detailed pictures later, along with the overlay we used once I get permission from the graphics person who created the real-time overlay. It is the same overlay which was used for the official FIRST scoring system in 2004.

I’m sure I’m forgetting something or something isn’t clear here - feel free to ask questions.