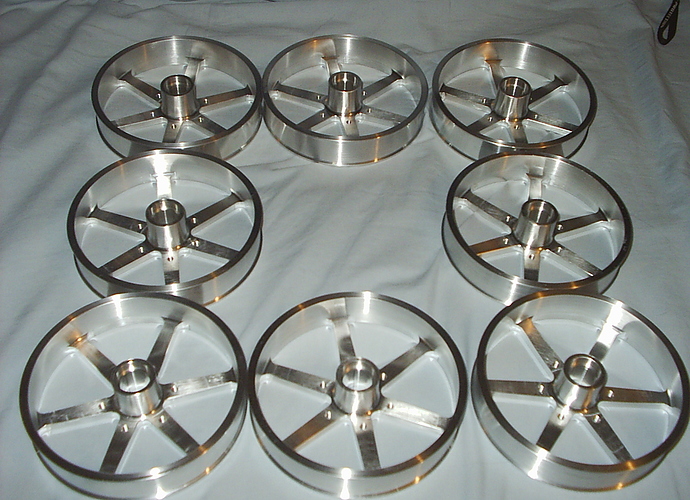 These are refined versions of last years design. They have 6 spokes instead of 3 to save some weight for the same strength.

Also, it now has the standard AM pattern so that to assemble the wheels we just bolt on the sprocket, and then press in bearings (no longer have to do a whole pattern on sprockets).

The Tread now has a rim on each side to support it more, and we made the tread area 1" wide rather than 5/8" so that it doesn’t wear as fast.

These are for the base I posted last week by the way.

Woah. I like, a lot. These are seriously sweet, and I think I’ll be copying part of this in CAD… Mind if I use the idea in order to make the wheels a one op machining part?

Woah. I like, a lot. These are seriously sweet, and I think I’ll be copying part of this in CAD… Mind if I use the idea in order to make the wheels a one op machining part?

Thanks for the kinds words.

It’s almost a single operation, but we have a lip on each side to hold tread on (although one side would probably have worked… i wanted to do it) so you have to take 1/16 off the face with a lathe… but that’s pretty easy and quick. These were all made in a day anyway.

Nice, they look good any shiny! I am sure that it took a lot of time, but were worth not spending $80.00 bucks a pop on the AM website…

Did you just put round stock in a vertical mill with V jaws or something? Machine a circle out of a block? Use a lathe with live tooling?

Nice, they look good any shiny! I am sure that it took a lot of time, but were worth not spending $80.00 bucks a pop on the AM website…

Hehe I don’t know when we speced out very similar wheels to manufacture this year our machine shop sponsor quoted over a thousand dollars worth of work. In the process they found AndyMarks website and refused to make wheels for us because we could buy similar wheels for so much cheaper than we could make them.

I think 294 has the resources to make these in house ( I’m sorry if I’m wrong ) and those sure are some beautiful wheels. However, if you don’t have the ability to make wheels like these and want a high performance option AM’s are always a good way to go.

Qbranch and StudmanDan; We don’t have an in house CNC, just a mill and lathe. However, our local community college where we work (along with 330 and 2150) has several, we could have cut them there.

However, we actually asked our sponsor, Northrop Grumman: Space Technology, to cut them for us. I intern there as well so it makes for easy access to shops. Just in my area there are 10+ various machine shops with at least 5-6 CNCs, but often have more. They cut parts for sattelites, so they are used to holding things that you wouldn’t think you can hold.

So, The material was cut from block scrap aluminum (anything not brand new is scrap, it’s not worth their time to re-square stock to cut it. Even the four 38"x5" 3/8" plate for our base) during the night shift; On nights only 1/2 the machines are manned so the machinists sets up his NG job, then does ours while the NG work is cutting.

I just talked to the shop, they actually added an operation in. They clamped a square block and did all the face work (ended up looking like these](http://www.chiefdelphi.com/media/photos/26619)). They then flipped it over and clamped it in soft jaws and faced it to the correct thickness. Then they put in on the lathe and cut the tread groove.

As for them being too thin, we used the same thicknesses on last years wheels and they worked out just fine. If there are any issues, we’ll just beef it up slightly before we cut the ones for the season (before any one says anything, that will happen during the season). The way I CADd it allows us to change the thicknesses and have everything change to match it, so it’s no issue.

Thanks for the input everyone.