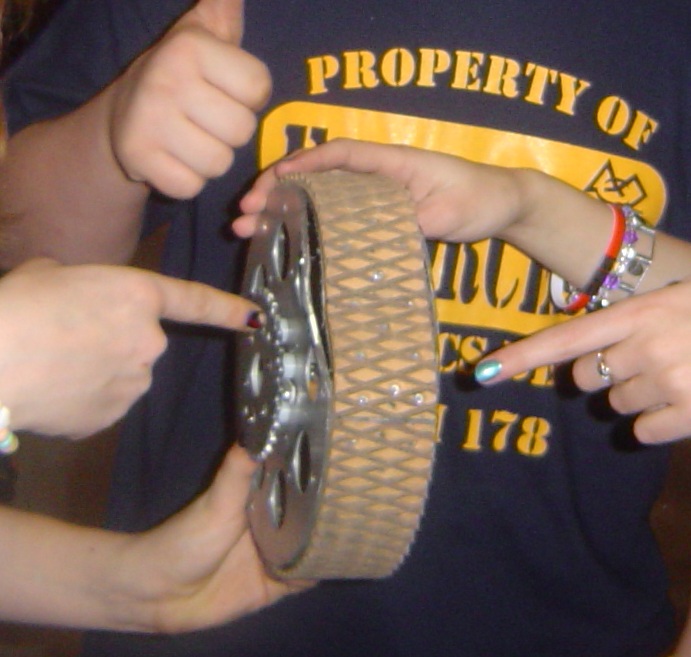 During a match on Friday at GTR, 771 was playing against 178. We were defending against them, and I guess we pushed them a tad hard. One of the members of 178 came up to us after the match to show us what we had done to their wheel. We were using the kit gearboxes in a six-wheel drive configuration, were at max weight, and had roughtop tread on our outer wheels.
Adam_Richards December 31, 2018, 6:51pm #2

Wow that’s crazy! Was their wheel exposed at all?

when i saw that at GTR I was :ahh: , how did that happen

this is very common. those wheels do not hold up well.

I knew you were some aggressive drivers from your amazing job in Waterloo with us and 188. But seriously, you must of hit them hard :ahh:
Let loose on them a little but that time Kate :yikes:.

The same thing happened to us in Philly. We have not yet reviewed our videos to determine how it could have happened.

We had tons of problems with our wheels in philly.

The tread came off twice, it needed to be riveted down. We lost one wheel beyond repair, and by the end of the day, one of the two IFI wheels were just like that.

I think one of the problems was that IFI designed these wheels before the game was put out. They may have had some hints that traction would be needed, but they probably didn’t expect THIS kind of phsyical gameplay. At SVR, the spokes on 1280’s custom wheels were completely sheared off in the second Finals match. If gameplay was that rough on their wheels (which appeared pretty sturdy), I can imagine it could do some pretty bad things to the IFI wheels.

Seems odd. 1293 used them as the center wheels on our 6WD setup (with Skyways for the outside), and we never had a problem with them all through Palmetto. (Look at the videos on SOAP, and you’ll see we weren’t exactly being gentle with Chomp, either.)

We did have issues at times with popping chains on the gearbox-IFI-wheel route, but I don’t have the evidence needed to pin that on any one thing. Besides, we remained mobile for all nine matches.

Yeah… 1341 used 6 of those as well, and we had not a single problem with them at UCF. Not a dent, not a removed rivet. We weren’t a full-time defense bot, but it did play a big part in my team’s strategy after we shot off the initial 9 balls we were carrying.

We, 1138, also used 6 of those. The only thing we noticed about them after BAE was pretty big dent in the front of the wheel from playing defense, and then at LA, we had stripped some screws, broke some rivets, and i think quite a few more dents after LA, but nothing major.

We have a lot of work at ATL retreading all and fixing broken screws in 4 of the 6 wheels. These wheels are pretty sturdy though from what we’ve seen, and we’re a hard-hitting defensive robot.

it seems whenever i see a set of ifi’s and a pair of andymark transmitions together the ifi wheels disintegrate. as soon as we put a little load on our drive-train the wheels were in pieced the sprockets lost concentricity. they all started wobbling and the ball bearings EXPLODED!!! the whole bolt-together plate thing just doesn’t stand up to much force.

it seems whenever i see a set of ifi’s and a pair of andymark transmitions together the ifi wheels disintegrate. as soon as we put a little load on our drive-train the wheels were in pieced the sprockets lost concentricity. they all started wobbling and the ball bearings EXPLODED!!! the whole bolt-together plate thing just doesn’t stand up to much force.

We have the AM 2 speeds with the IFI Wheels, and they still held up. For the sprockets, we had to put a bearing in the center of the sprocket to keep it concentric though.

You’re right though about the plates, they could be thicker, but for their weight, they’re pretty nice.

We are replacing our rear pneumatic wheels with a pair of 2 inch wide 8inch IFI’s. I doubt we’ll get any damage like that! I sure hope not!

Like any other wheel on a FIRST robot, these wheels can get much abuse.

Between high speed contact with the diamond plate ramp, ramming into the polycarbonate ramp wall, or hitting the 1 point ramp from the side, a robot wheel will sustain damage during a FIRST match unless the driver is careful to not do these things.

You cannot use these wheels or ANY others during a FIRST match and expect no damage. These are still good wheels.

Keep in mind… this positive endorsement of these wheels is coming from a guy who sells a competing product. How’s that for some GP?

I don’t know 1902 used these wheels and had a tough time with them. We have a 6 wheel drive train that can be seen here

These wheels are no longer on the robot, in fact from the moment we used them they caused nothing but trouble. The bearings and the wheels ( we used the 8"x1" ) combined with the 36 tooth sprockets, 3/8" shaft and AndyMark transmission could not handle the first competition, in the application we used them. From the picture you can generally tell the way we ran our chains and the tension systems used and the way we ran the chain.

Like the picture above we have a bent wheel, in the finals matches in Florida the top bent 1/3 the way off the wheel. We had absolutely no way to fix the problem we ran our auton and were out of the match. We constantly had trouble with our bearings shifting and the structural integrity of the wheel shifting a few degrees to the side we would turn. ( the shift was such that if you grabbed the wheel on the top and the bottom and pushed slightly on the wheel you could see the shift and it would remain there ) When the wheels would turn the shifting would cause the chains to jump, we could not get any uniform concentric movement out of the wheels they would always shift. It was unfortunate but our solution was to add chain guards and change the back wheels with skyway you get in the kit. The change worked decent until the wheel bent open and fell apart in the finals match at Florida. This model just seemed not to handle the twisting forces too well.

Unfortunately we had to take all the wheels off and replace them with skyway wheels which we trimmed down the rubber and used the remaining spare tread and hardware to assemble these wheels. ( I’ll be posting pictures of our changes as soon as I can. )

The good news is the solution worked, since changing the wheels we’ve not thrown one chain not broken one time, in fact we went 11-2 in Houston and undefeated in qualifying.

IFI wheels are a good design it just seems that our application of them could not be supported by the structural integrity of the wheel. This was a shock to us because we didn’t use them in any extreme situation just a typical FIRST drive train. But having talked with other teams they seem to work well on some of the smaller models ( or the same size but wider ). It just happened to be our size which did not perform well. Maybe thicker material? Maybe an inter-structural system on the sidewalls and sturdier bearings?

For us however it was just an unfortunate series of events maybe but we have $500 in wheels sitting in a box in my garage that we can’t fix.

IFI is a great company and makes very good products, they saved our butts in Houston overnighting a new set of hardware and sprockets to us for our new wheels that we had unfortunately left in Orlando. It just happens that these wheels did not perform as desired and it did cause some disappointment. However I do believe that with some further testing, and some modification for next years model they can be performing as originally intended.

Colson wheels, to me, seem to hold up the best in FIRST competitions. They have wicked traction, and they dont lose tread, or dent. The hubs are all plastic, and the wheel has a good 1" layer of soft rubber. They sell em in all sizes too from 3" all the way to 14" if i am not mistaken. However the IFI’s look cool…

You must have had hit the other team pretty hard.

We forgot to use lock tight fluid on all of our wheels, so, one of our wheel side plate with the sprocket mounted on fell apart. The plate of the wheel was completely de-attached(the plate with the sprocket moves but not the wheel). No one realized it until when i tried to spin the wheel to re-align the chain. And our other three wheels had at least 2 or 3 missing screws from each plate and all the other screws were on the urge of comming off. Also, one of our sprocket was bent, so, the chain comes off and re-aligns it self after each revolution and some how it magically bent it self back to shape after 2-3 rounds.

Our team also had problems with the wheels, at the Las Vegas regional we worked wonderfully, and then shredded one of the bearings on our wheels (all were 1x8 IFI on a six wheel drive train) for the remainder of the competition we could not keep chains on, and other bearings were about to bust, and many things were bent and misaligned. Also before shipping at the end of build seasone we had chain problems, and found that the screws were coming loose on the sides, and when we secured them the problems left.