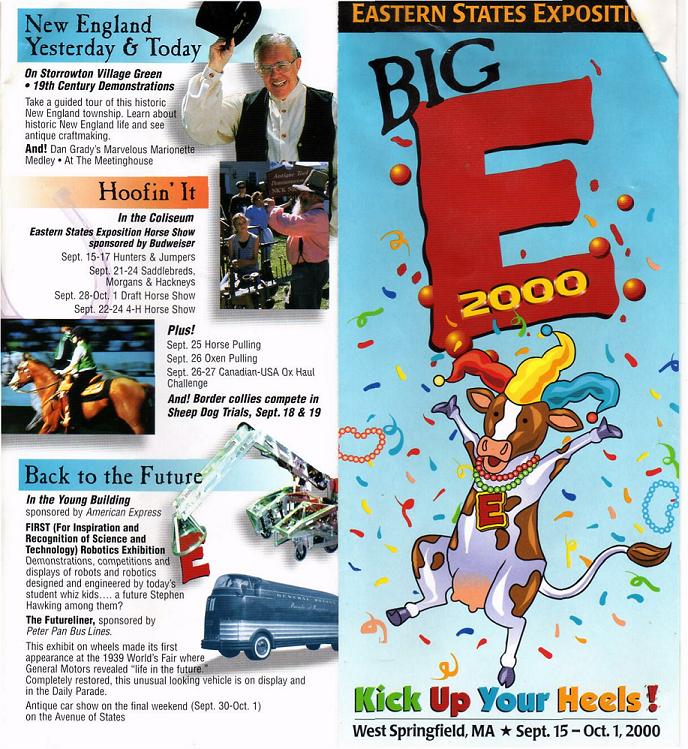 This is not really a regional but they dont have an off-season for 2000.

Anywho, I went to the Big E this weekend and that reminded me of this and I figured I would upload it so us older folks could recollect about yester years. ( this was my first FIRST competition!)

Who knows what team this is? That’s Cool.

This event at the Big E, hosted and put together by the good folks on Buzz Robotics, was the beginnings of at least 2 teams that I know of. Rosie Robotics, Team 839, is a direct outcome of this event as my son first saw the program here and we started Rosie the next year (2002) in Agawam. Also, 1027 Mechatronic Maniacs from West Springfield is an off shoot of Rosie with their rookie season in 2003.

It’s been a great ride ever since…

I saw this event and I know that Team 195 Cyber Knights and I believe Team 157 Aztechs attended. I was planning on going to Housatonic HS in the spring of 2001 to start a team and then the school came to my company looking for help.

The event was attended by, I think around 20 teams. Teams were rotating in and out throughout the 17 day run of the fair. I don’t have a team list. You would have to contact someone from Buzz, who hosted the event. Matches were run all day, every 30 minutes, static displays were set up promoting the FIRST experience.

Too bad they still don’t do it. Looks like a lot of fun.

The Big E’s a really BIG thing! We even know about it here in PA. It hosts one of the biggest sheep shows in the eastern half of the US.

Having the robotics diplay there again would be great, BUT it’s during school time and getting people free to staff a display would really be a challenge.

Just a bit more info. It was a great show, well run by the Buzz folks. I believe they ran matches about every 20 minutes. The portable viewing stands emptied and filled with each match and emcees, Jim Morin, Mike Sperber, and others had to give the same intro/explanation pitch to each group. The last few days were run in tournament style–I can’t remember who our partner was, but we won (Team 190).

I remember seeing this event before i ever knew about FIRST. I was in 7th grade, and I was at the Big E with my parents. I guess we just stumbled upon it. Its cool because thats the first time i ever really saw a robot competetion (even though i always knew of them because my cousin was on a team)

This event was the first time I got a chance to drive team 38’s tank of a robot so I remember it pretty well. It was cool to see the general public interested in FIRST, in a way most people wouldn’t ordinarily get to experience outside of a regional or well-advertised off-season competition. It was nice to see people walk in and fill up the stands not knowing what to expect, and leave pleasantly surprised. With a regional or off-season competition, the portion of the general public attending usually has a good idea of what’s going on, from prior experience or connections to friends/family/co-workers/etc. involved in FIRST. The majority of the crowd at the Big-E went for the fair, and stumbled upon FIRST on their way through the various exibits. Really a great way to introduce people to the program!

I remember our team did pretty well against the other robots (after nearly last place at both the UTC regional and nationals in Epcot), once we figured out our mammoth of a robot made a great defensive blocking bot! (terrible offense.) Buzz had billed it’s robot as un-movable when they put their sticky wheels down, but we managed to shove them a few inches in a battle for the ramp. In the process though, with a few seconds on the clock, one of our fisher-price drive motors blew out, spewing smoke into the air, much to the excitement of the crowd. One of the attendants dove onto the field into our robot and pulled the battery out! (this being before circuit breakers- the days of the mighty 60 amp fuse). I’ll never forget that, and would definitely love to see this event happen again. Maybe a cooalition of teams would like to get together and try to plan an annual Big-E off-season competition?

Maybe a cooalition of teams would like to get together and try to plan an annual Big-E off-season competition?

That’s a cool idea… An all day thing would be tough, but an evening or weekend thing would rock

The robot in the brochure was Team 230’s sophomore year entry. It was a pretty thing but could hardly get out of it’s own way. It even sported an illegal venturi vacuum system to pick up balls. We had a bit of trouble reading through the entire rule book in those days.

The robot in the brochure was Team 230’s sophomore year entry. It was a pretty thing but could hardly get out of it’s own way. It even sported an illegal venturi vacuum system to pick up balls. We had a bit of trouble reading through the entire rule book in those days.

OMG… I didn’t even notice the robot in the brochure… :ahh:

And that is not a joke or anything… Wow. I think I need my eyes checked.
I saw that cool bus… but not the bot.

OMG… I didn’t even notice the robot in the brochure… :ahh:

And that is not a joke or anything… Wow. I think I need my eyes checked.
I saw that cool bus… but not the bot.

And you say you’re a FIRST-a-holic?