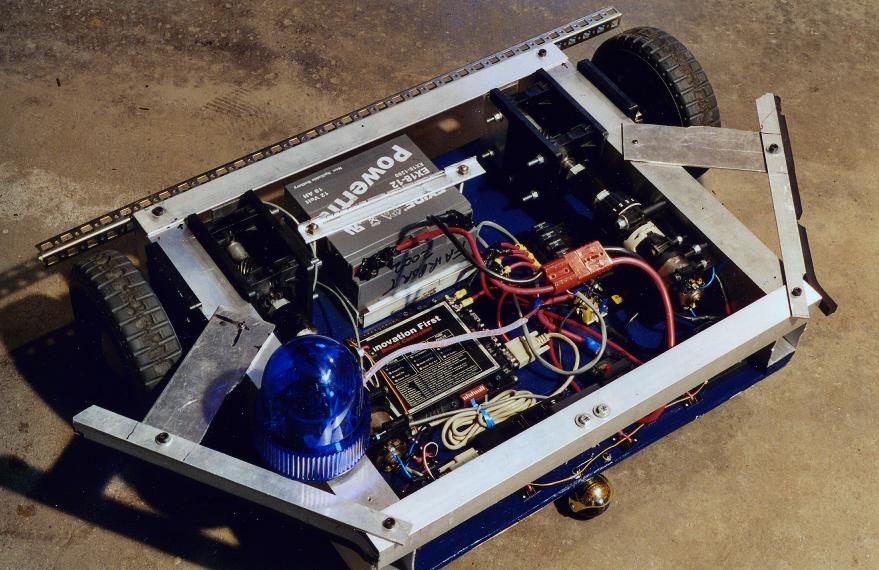 Looking at the blue light is this from last year or basiclly a robot made from leftover parts?

Ok I finally took a photo and scanned it in.

This is our practice bot - practice for everything. It took us 3 one hour meetings back in november to put it together and get it running.

It uses the stock FIRST transmissions and drill motors from last year on the 2x4 alum frame beams. The base is 3/8" plywood and the cross members are 2x2" angle alum.

we were also able to put a gyro on Frank and get the basics of closed loop steering and our auton sequence down.

it also allowed the students to get driver practice even before the kickoff meeting - it handles a little different than our real bot- but being able to drive a big RC machine like this around is excellent training - and with the two wheel drive and castor, we never had to replace the battery - it lasted for hours and we recharged it overnight.

we also discovered that if you put a sheet of 3/8" plywood on top of the frame you can connect the controls with the tether and sit on Frank and drive it around.

the bot is very compact and fits nicely in the trunk of my Saturn SL, or the back seat and its easy to carry around.

Its a little hard to see in the photo, but we doubled up on the 30A breakers for the drill motor circuits - when we drove the bot very hard 30A was not enough (they would reset).

BTW - we named it after the night shift factory supervisor, Mr Frank Pandenia - who has been a major asset to the Fairport / Gleason team since 1999.

We plan to make another one next year, using the EDU RC so we can practice with the C code.

here is a photo our our real bot KG1: you can see the baseline of FRANK reflected in it:

also, those wing things on the sides are only bumpers, to keep the wheels from taking a bash with new “student drivers” :^)

It took us 3 one hour meetings back in november to put it together and get it running.

wow… that’s not bad at all! good job man!

That’s a good idea to build a practice robot in the fall, helps to give all the new members on the team a chance to learn the different parts/assemblies of the robot so they won’t be so green when the six weeks start. It’s definitely an idea I’m going to bring up to my team and we can finally do something with all the extra parts we’ve been collecting for the past six years. Hopefully It’ll also give me a chance to learn programing, something I really want to do.

here we finally posted a photo of our real bot, KG1 with the triwheels on: