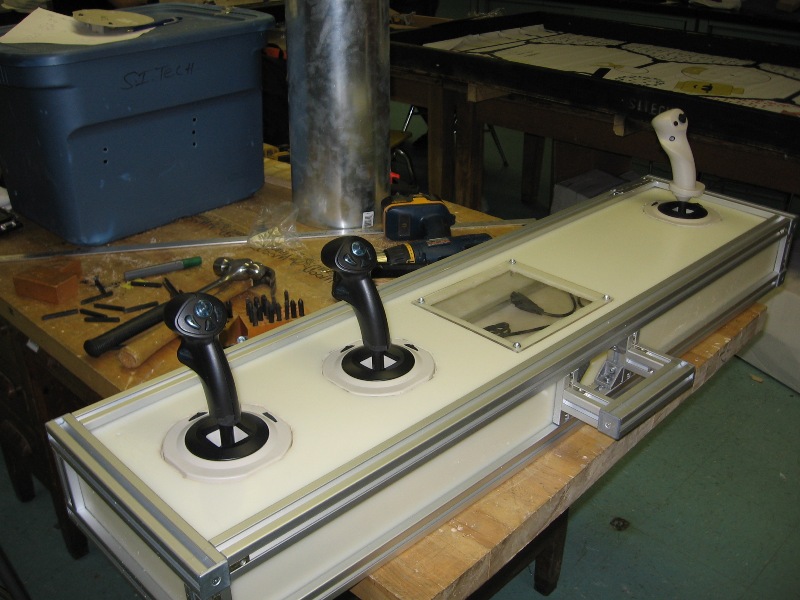 Hey guys, i built this control center, its not fully done, but i would like to have some opinions on what i can add to make it better.

Very nice…you made the joysticks yourself!!:ahh: thats crazy sweet. I suggest some crazy paint a few team stickers and an easy button just for looks

Just to add to what Eugene said, we are going to be adding some switches, potentiometers, and maybe some push buttons and a slide pot, as well as autonomous/disable switches.

WOW!!! That is beautiful!

So clean and clearly very sturdy. Perhaps some kind of rubber caps to cover the corners of the control center and help prevent damage to other surfaces. Of course, you need your team number to tell who’s craftsmanship this is.

Thank you for the compliments, any suggestions for paint color?

Now the question is, what do you go with? Paint, cold cathodes, decals, or a combination.

Thank you for the compliments, any suggestions for paint color?

Although I like the white, I would go with your team color(s).

Plus, you better start saving weight now! That looks mighty heavy. Pull out the hole saw and go to town!

I don’t know about you, but I think lightening holes look good!

Not having 2 right handed joysticks?

Not having 2 right handed joysticks?

ye, we wanted ambidextrous joysticks, we go for function and comfort

Nice work! It’s a nice design and looks easy to use. Post a picture of the finished product!

Now the question is, what do you go with? Paint, cold cathodes, decals, or a combination.

That would be perfect for this control center! Have them inside and have your team number cut out from the sides to let the light through.

Look nice! Maybe a logo or some color to spice it up. Maybe some buttons and switchs if you 2nd driver prefers that over using a joystick.

You could always put a toggle switch on there with a flip-up guard on it.

VERY NICE!!! It has a modern and clean look to it

it needs some sweet lights inside of it…seeing as it’s made of frosted Lexan and or white nylon, if a few blue LEDs were placed inside it would have an awesome soft blue glow eminating from it

I would put some green ooze, maybe some biohazard logos. All on a black background with some green LED’s. Just use your team’s theme (plague) to come up with a good design.

There’s only one that’s definitely cooler than that. And it had a dashboard display built-in.