Is it just me or is there an invisible wall preventing you from doing a Dukes of Hazzard out of the arena?

Great job. I’m really impressed my the amount of time it took you in order to do this. :yikes:

Excellent simulation for such a short amount of time since kickoff. Any chance that the camera view options will be expanded upon? Perhaps a user controlled zoom or a middle option between the two existing ones.

This is awesome, I just regret that it’s blender, because I’d love to be able to interchange the robot with some of our 3D models from inventor

Has anyone been able to ELEVATE the car above the plane of the platform before the time runs out. If so, what was your method and did the bonus in points factor in?

Well, I decided to test that with our robot’s inventor file. But after importing it into Blender, it had a lot of duplicate vertices, which totaled to over 300,000 faces. In comparison, the current car model in there is 94 faces. It might be simpler to just remodel the robot in Blender for a game-ready model.

Also, I didn’t implement the bonus, for the reasons that the game really never ends, and after several tries, I couldn’t get the car up there anyway.

An update will probably come later, but now I’m adding a few more camera angles, an overhead one, and a sort-of third person view (an automatic effect achieved by the Camera Actuator).
For visual effects, I may add some super-cool OpenGL GLSL shaders, but I would like to know how many of you actually have a graphics card better than an nVidia GeForce 6x series before doing that… (any lower can’t use GLSL)

EDIT: Yeah… it breaks kind of hard… I’ll put that down a bit. I had changed it to better deal with the gravity (I had to set it at -19.62, twice Earth’s gravity, for realism), but it dealt a little too well. The car’s suspension is also doubled, but that worked out well, while the braking did not. I am unsure at this point of how to do a “zoom” camera effect… (but I have an idea now…)
I did put the invisible box around it, just to keep things from flying out (including you), but that may be removed with a penalty system - if a ball goes out, it’s returned midfield, and a point is deducted. My dilemma is figuring out how to get the game engine to identify who hit it out. This isn’t a problem with just one robot, but if there is more (hopefully there will be) that will become an issue.
I got a book on Python, so I might be able to start using that for more complex logic, like AI! But not really soon, I mean, there is a robot to build…
And to the person who wondered about acquiring the field, I do have the capability to export it in .3ds, .obj, .dae (Collada), and possibly .fbx (not sure on that). 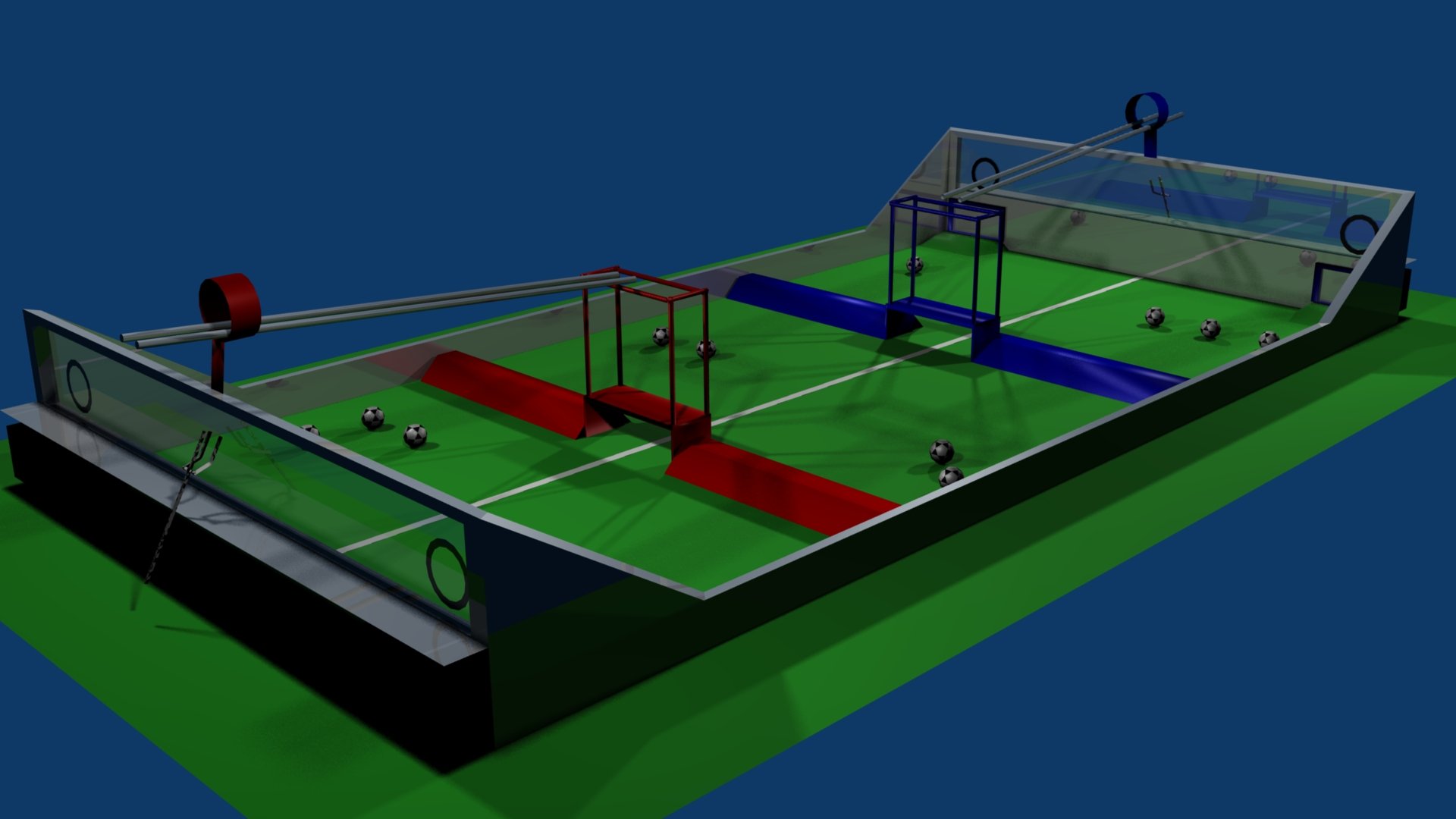 A teammate created this mockup of the Breakaway field from documents provided by FIRST. It is an approximation, and is not 100% accurate. This mockup was made using Blender software.

1/10 Edit: And now we have a game simulator at:
http://www.teamtitanium.org/resources.html

I feel like starsky and hutch flying the car over the ramps! Good job and nice simulation!

this is really great. this will provoke endless nights of playing

Would you be willing to release the source? I’m using Linux, so I’ve got all of the libraries and building from source would probably be easy.
Maybe you could open a FIRSTForge project for it. I’m sure more than a few people would love to help develop this as a group project.

Also, I didn’t implement the bonus, for the reasons that the game really never ends, and after several tries, I couldn’t get the car up there anyway.

An update will probably come later, but now I’m adding a few more camera angles, an overhead one, and a sort-of third person view (an automatic effect achieved by the Camera Actuator).

I was able to get the car up there (before the bumpers were added), and also can you add camera angles from all 3 driver stations (at some point)?

And, great job with everything.

I was able after much trial to get the car to glitch up there, but then it started shaking around and mass confusion insued. Also, are the bumpers supposed to be able to glitch through the floor and walls?

Chris is still having account problems. Here are the revisions that he uploaded yesterday:

The file is still on http://www.teamtitanium.org/resources.html.

I downloaded and ran “BreakawayRev4.exe”. Application failed because it didn’t initialize properly. What should I do?

I downloaded and ran “BreakawayRev4.exe”. Application failed because it didn’t initialize properly. What should I do?

If you were running it from the .zip without extracting, extract all the files then run it.

By the way, this was one of the fastest ways to demonstrate the game to another FIRST alumnus who didn’t know the game yet. Definitely a good job on this.

Yep, you need to extract it so it can use all of the dll’s it needs to run.

Thanks for all of the positive feedback on the game.

This is absolutely amazing! Good job at creating it.

I did extract all 31 files and when I run BreakawayRev4.exe…
The application failed to intialize properly (0xc0150002). Click on OK to terminate the application.
Any other suggestions?

Well, my best suggestion is to download Blender 2.49b. It is only 34.7 MB uncompressed, and you can get it at http://www.blender.org/download/get-blender/
Then, after installation, copy every .dll and manifest from the installation directory (C:\Program Files\Blender Foundation\Blender) and paste them into the folder that BreakawayRev4.exe is located (overwrite the old .dlls).

EDIT: Oh, wait…
That error for some reason appears on computers that are entirely unable to run Blender or applications made by it (our school laptops behave like that). Sorry…
Next year I’ll try the UDK! (maybe. don’t count on anything.)