That’s pretty neat. I like the little car robot.

You should be able to add another player robot by using different keys to control it with. Not sure what you could do with cameras, but you could just do a overhead view or something.

I am working on an update, with a much-requested feature: MULTIPLAYER! (not over a server/internet/LAN, just on the same computer.)
Unfortunately, my knowledge of Python is too sparse to even edit the car template I’ve been using, so I would like to thank a programmer friend of mine in Australia, raider, for his assistance so far (although I doubt he’ll be reading this…).

And, I have changed the car model to a robot-esque chassis.

Physics accuracies are also being improved, at a slight expense to performance, but not much.

For those of you that have been asking about acquiring the actual file for this, instead of the excecutable, I have decided to release it after the national competition is over, but not until then.

I just have to say that… that is extremely cool. I’m about to test the simulator XD

Thanks Team 1986 (Team Titanium) for the field model!

Thanks Lockheed Martin for your continued sponsorship!

Thanks FIRST for your continued support!

Suggest improvements, discuss uses, brag about high scores, post pictures or links to videos, etc. in the FIRST 5th Gear forum (above) or here on CD.

Alright, the much-awaited update is finally here!
Much has been updated, but I’ll add some suspense and let you read the Controls and Info document after downloading.

For this game, I would now recommend having something better than an integrated graphics card to play it. It’s fine on my nVidia GeForce 6800 (over 30 fps), and okay-ish on my GeForce 7150M (anywhere from 5-15fps), to give you a picture on performance. Since this is using OpenGL shaders, it will run slower than DirectX shaders, but not by too much.

Have fun! Here’s the link: 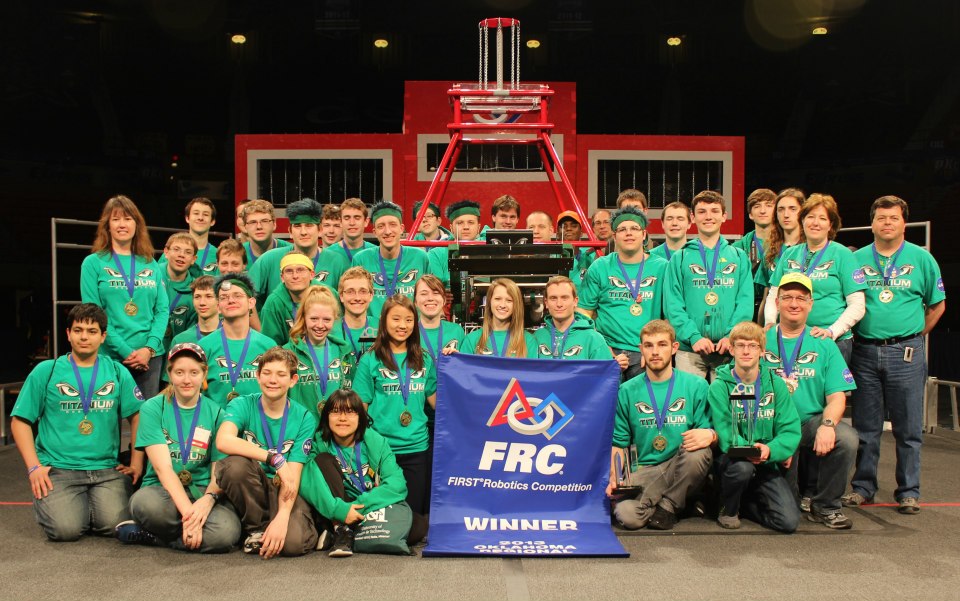 They are still not letting me post everything…
Sorry for any delay on the actual link getting here, I’m just seeing if a shorter, non-HTML-link-containing post will show up.

EDIT: Well, it let this one in…
Major changes, in controls and graphics and menus! Read the Controls and Info document for more info.
As the post that will eventually get here said, I would recommend a semi-decent graphics card to play this. To give you an idea, here are two I’ve tested it on:
nVidia GeForce 6800: over 30 fps
nVidia GeForce 7150M: 5-10 fps

I realized that some people were having problems with the multiplayer version of the game, so now both versions are available on the website.

Okay, I am happy to announce that I am releasing the source file to this game!
As promised, it’s Championship time, and here it is: http://teamtitanium.org/resources.html

Not much has been improved on, and only the single player version is available (both because the other is glitchy beyond belief and I only had the file on our old laptop…), but it’s still there.

Feel free to improve upon it, I consider this in all regards open source and open to the community. I’d love to see this turn into some sort of competition (Simulator Award?) in the following years, but even if just a few teams attempt it next year, that would be great.
I do ask that if you do modify this in any way and/or release it, please give Team Titanium FRC 1986 credit for its original creation. Also, as a courtesy to other pieces that have been used in it, like scrips from tutorialsforblender3d.com, do not remove headers from the scripts that state who they belong to.

Once again, many thanks to the 5th Gear team for their inspiration for this, and to all the teammates and CD posters that helped improve upon the original concept of this!

…
Once again, many thanks to the 5th Gear team for their inspiration for this, and to all the teammates and CD posters that helped improve upon the original concept of this!

Right back at you Chris! - Many thanks to you and Team Titanium for the Field Model that saved us many hours of modeling!

I think the idea of using simulations (aka serious games) is here to stay. They are too good as educational/mentoring tools, design/strategy/practice tools, fun pastimes, recruiting/exhibition/outreach tools, or the foundations of a virtual competition (one that is more than a hand-eye coordination contest) to fade from the stage; and folks like you and the other contributors to the community are making “it” happen.

Let’s keep having fun - There are 8.5 more months until Kick-off - It’s time to start working on our encore