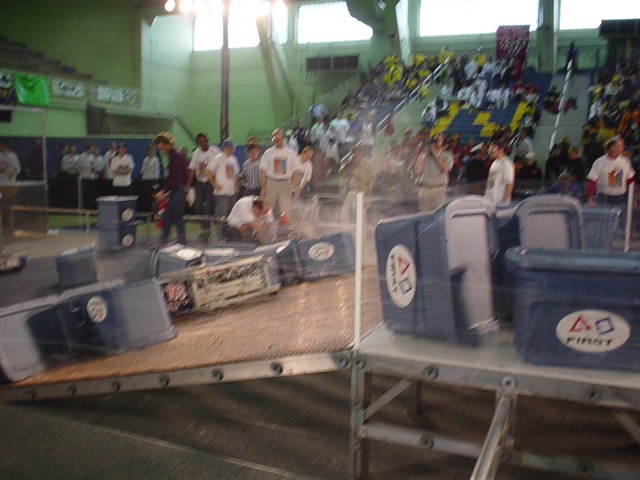 That was team 1184 – a great bunch of people. As soon as we saw the smoke, the MOE pit crew was in motion. As it turns out, a loose bolt had fallen into one of their speed controllers. The FIRST Volunteers were rushing them to the field and they didn’t have enough time to get the bolt out. The heat from the short melted a hole in the speed controller and effectively bonded the speed controller to the plexiglass housing it was mounted to. But that’s nothing a hammer and a big screw driver can’t fix. The combined efforts of 1184 and 365 got this robot running in time for them to compete in their very next match.

This was the only regional they could afford to attend this year, but if you happen to see them next year, be sure to stop by their pits. They all have spirit and a lot of potential. I think 1184 deserves a big pat on the back for their determination. I’m pretty sure we’ll see them again at Duel on the Delaware after the competition!

I came over to offer 384 assistance, but then saw 10 MOE guys there. I still offered, but I knew that MOE had it under controll.

I remember that. 1184’s pit was near ours, and by the time we found our spare motor controllers MOE was to the rescue. A true showing of Gracious Professionalism.

Yet another resurrection of a tired old thread.

I didn’t know they had a pic of this up on CD. I’m rather glad it got dragged up. I was in the pit when it happened, so all I heard was a big “ohhhhhh!” from the crowd.