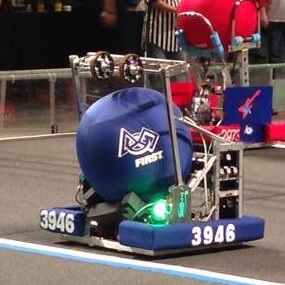 Meet Buzz, 3946’s Aerial Assist robot. Custom mecanum drive base, single roller intake with pneumatic arm control, dual CIM “hammer” for high goal and truss shot. The story behind the name: our prototype robot had a lumber chassis, and was nicknamed “Woody” by one of our mentors. When we built an aluminum copy, “Buzz” was just too obvious. If redoing today, we would skip mecanum and do a bang-bang or other simple kicker speed management. Definitely our best-looking and most reliable robot up to that point!

Continuing my 3946 history ramble… (and yes, I invited all of the alumni and mentors with CD accounts to contribute)

2014 saw a big change in our team dynamics. All of our student leaders from the first year had graduated, we had a bunch of new mentors, and we separated the programming and controls teams. More importantly, this was the first year we went into things thinking yes, we CAN do this - competitively.

We did have a bit of initial shock when we realized the relative scale of the ball to the robot chassis - a 25" ball with a 78" circumference and a 112" perimeter robot Those numbers seemed even closer back then. The tension eased a bit when we realized that teams had dealt with a similar situation in 2008 FIRST Overdrive, and further when we realized that this game (apart from driving across a line in autonomous) was ALL ABOUT ONE THING, that is, manipulating that one ball.

[Personal privilege taken in this paragraph] As I sort of hinted in my 2013 narrative, in 2014 I tried to be in all of the groups, to help coordinate among groups, and to take home the math to find the weaknesses. I was officially mentoring the new controls group, which had been split from programming along with a new mentor (Isaac, now our lead NTM). Isaac is real electrician and pneumatics tech. Once I realized that he knew this job so much better than I did (and was a good mentor/teacher besides) I spent most of my time bouncing among groups, fixing problems and identifying things other sub-teams needed to know; I was really in my element.

Our game analysis in 2014 was flawed in that we expected game flow to follow the kickoff video, being heavily weighted toward assists and offensive play; we had no idea that this game would be nicknamed “Aerial Assault” after a few weeks of competition, that assists would be a relatively minor source of points during seeding, and that many of the assist points would be due to HP ball handling, because so few robots could actually snag a ball reliably. Also, the rules regarding the low goals as called by referees were drastically different from the rules we read; I was not monitoring either CD or the Q&A at that point to know exactly how it was we were so far off. To be more explicit, most of the low goals scored in Aerial Assist would have been deemed illegal as we read the rules.

In any case, we had two system/task teams, “drive” and “ball”. Drive team decided that this would be a good game for mecanum. (Erroneous given the game as played, but reasonable given our analysis). The ball team began work on a (really big) roller claw, but ultimately down scoped to a roller arm.

Drive team had somehow figured that a mecanum drive should have wheels directly mounted on the CIMs, with no reduction. Fortunately, I “did the math” and realized that this was not at all viable. I recommended three gearbox ratios, based on “soccer”, “[american] football”, and “basketball” style game play. We opted to gear based on “football” but AA was played at “basketball” or perhaps a step lower. We were geared too high for the game, but not NEARLY as high as the drive team wanted.

I don’t recall our detailed reasoning for this, but in 2014, we decided that our systems (and preferably robot) should be prototyped in lumber before being built for competition in aluminum. This helps explain our failure with the roller claw, and ultimate success with the simpler roller arm. We built a wooden framed full robot, with mecanum drive and roller arm pickup. Mentor Lester took to calling the prototype “Woody”. Eventually, it stuck.

Oh, yes, launching the ball! We considered a great number of paradigms, including a pneumatic “thrower”, a few pneumatic “punchers”, an electric “matched launcher”, and a “kicker”. We ultimately went with the “kicker”. It is curious that our metal “kicker” never performed quite as well as our wooden kicker built of 2x4s, but our head coach put his foot down that we would NOT have any wood on our robot. The kicker on both robots used two CIMs and a rather low (10.7:1) gearing.

Around week 3 or 4, we had “Woody” performing all of the key tasks, though its CoG was much displaced, it was probably overweight, and it was certainly over legal dimensions, in that the roller gear motor was hanging outside the frame perimeter, but this was something we always had planned to correct with some belts on the actual robot. In any case, it was time to build the competition robot.

Buzz was built mostly from 1.5" channel, with flat angles and tees joining the pieces together using 10-32 bolts. The only inconsistency in moving from lumber to aluminum was in the ball pickup and launching. The drive team (which somehow was responsible for the metal kicker) decided that distances should be measured from the top of the chassis frame, which dropped about 2" in the conversion from wood to aluminum. The ball pickup team referenced distances from the floor, which was where the ball was. These inconsistencies created the need for a “pickup riser”, which was met by including some cell foam in the design, as seen in the image.

The pickup arms were rather curious. As is clear in the picture, they were actuated with pneumatic cylinders. However, instead of controlling them with a double solenoid valve, we controlled them with two separate valves, one controlling the air on each side. In theory, we could stop the arm at any point along the stroke by exhausting air from one side or the other. Because of the roller arm weight, we had separate regulators for top and bottom, so that when both sides were pressurized, the arm would (theoretically) hold its position. (You may see the four pressure gauges in the picture, near the right at the top of the “tower”.) It sort-of worked, after lots of driver practice.

The controls and wiring were not pretty, but they were solid - we didn’t have the problems with loose connections and tubes which we suffered from in 2013. We had designed the control board to be removable (from the bottom), but once it was in place, we decided to leave it there.

We bagged Buzz with only a few hours of drive practice, but continued to practice with Woody, which greatly improved our on-field performance and consistency over previous years.

Mostly because we were so easy to defend against (Mecanum drive train and low ball launch), we ranked poorly at Bayou that year.