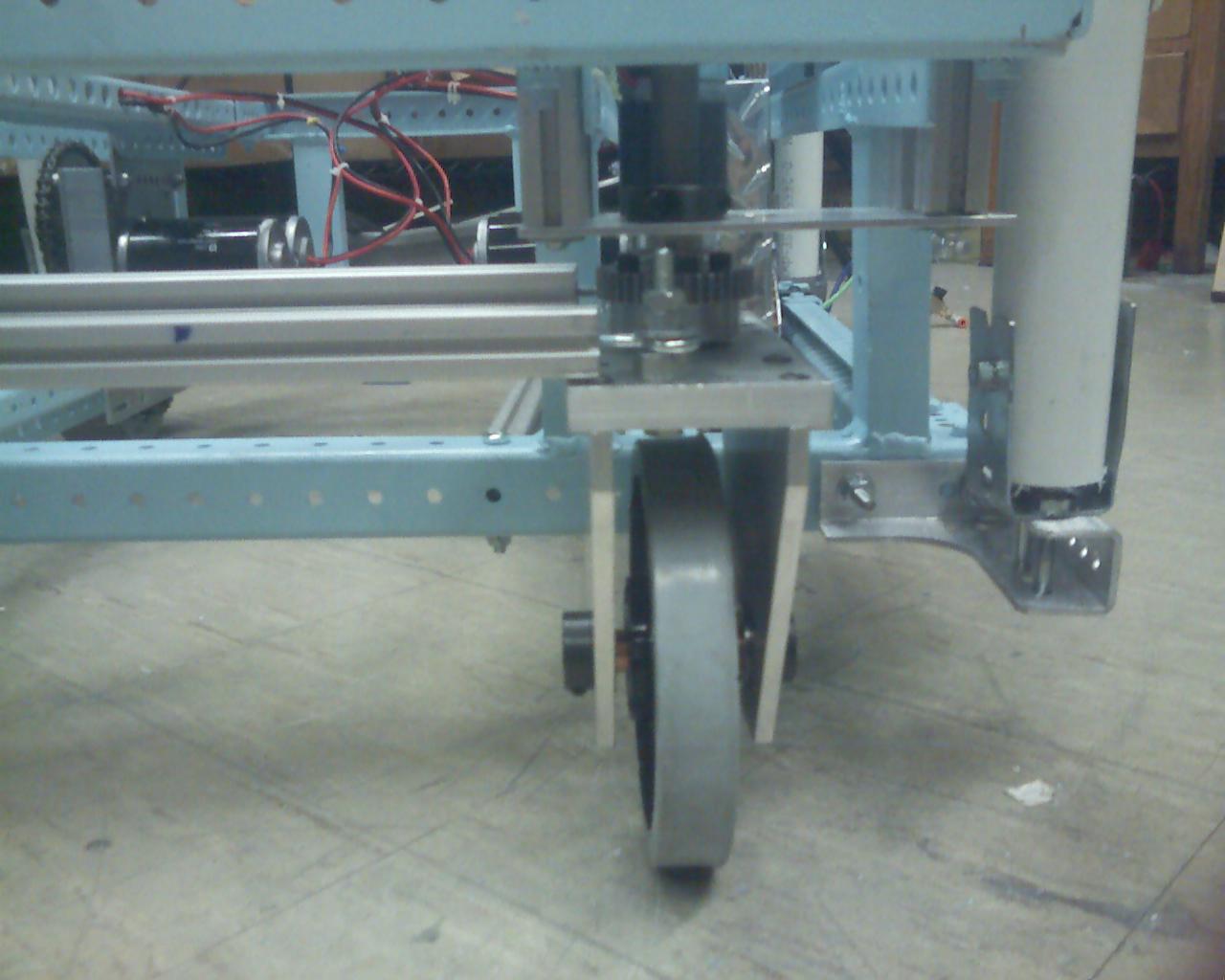 Closeup of 1405’s non-Ackermann steering, powered by a globe with a 8:3 reduction. This was in about week 4 before we put on the potentiometer, limit switches, front guardrail, electronics, etc.
Dan_Richardson December 31, 2018, 10:43pm #2

Is your fork bending or is that an optical illusion? Be very careful with this, 710 did this style of steering in '03 and it was very sucessful however our forks had a tendancy to bend and one match the entire wheel dropped out of the bottom on to the ramp.

Coincidentally we still won the match missing a wheel, wish I still had video.

But if we had attended a second competition it would have been nesc to manufacture new forks. Because once you bend it back the strength goes down dramatically. It looks like the way you mounted them ( looks like #10 hardware? ) it should be relatively easy to replace if this does happen, but with the high speeds of this game and high speed collisions I’d make sure to watch out for bending and stress fracture and figure out a way to replace them quickly in the heat of battle. Also if it does bend don’t let them get too bad before yanking them out otherwise you’ll be sitting with a dremel trying to cut off the heads because you’ll never get the bolts out.

Looks like this will be a fun bot to drive however, for some reason I’ve always liked this style over ackerman, maybe because its different.

By “forks” I assume the mean the aluminum wheel housings? I don’t think bending will be a problem. Maybe its the angle but they’re about 6 inches deep. 340 milled it for us out of 1/4 in. aluminum and it all fits together great, plus I stress tested it with my hands lol. Thanks for the kind words though.

Thanks Colin, it works great. It allows very tight turns and high speeds. We’re currently working on programming our potentiometer, so everything should be ready to go come March 6.

Thanks a lot Colin. I’ll let you know if it becomes a problem.

Why didn’t you do ackerman

I was concerened about that when I designed it, more so when the structure was slightly compromised. I was thinking about 3/8ths but I was also thinking about weight. Also I was not thinking much because I wanted to leave your school 2 hours ago when I was drawing that monstrosity.

WAG/Accidental Ackermann!
Turns out that we have Ackermann (spelled with 2 N’s)!! We take off the front cross bar and use the frame as the tie rod (the vertical shafts are the pivot points). The rear bar works for Ackermann because their pivot holes are inset slighly to the inside of the bot, pointing in the general direction of the rear axle. Obviously, it would be best to drill new holes that point exactly to the rear axle, but some Ackermann is better than completely parallel.