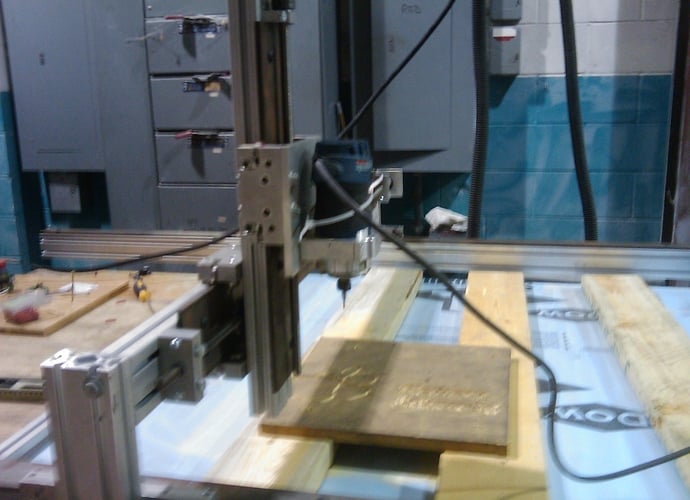 We decided that waiting on getting things precision cut at our sponsor’s location just isn’t a great idea for prototyping. A lot of fundraising, building, wiring, etc. later we have a CNC Router. It’s got a Bosch Colt 1HP router as the spindle, and should be capable of cutting all types of woods, most plastics, and some metals (specifically softer materials on up to aluminum). It has jog speeds of around 130ipm and cut speeds as high as 80ipm at the right depth.
We just finished doing the test run a couple days ago. What did we cut, you ask? Nothing… Instead, we decided it might be more fun to try something out of the ordinary:
http://d5robotics.org/Content/View/947/CNC_Router_Music
joeweber December 20, 2009, 4:07pm #2

Nice. We have thought of doing exactly what you have done but have never got around to doing it. How are you comtrolling location? We were going to use a joystick on ours our use light sensors and a pattern.

We’ve actually dedicated an old Pentium-4 computer to its control. The parallel port runs to the stepper motor controller (a Gecko G540) to control all four stepper motors. There are two on the X (one on each side driving an acme leadscrew) and on both the Y and Z. Theoretical accuracy is actually limited by the precision of the leadscrew (“precision acme leadscrew”, off of mcmaster) which put us at around 7 thousandths of an inch over a foot.

We’re using EMC2 software to do actual movement control, which runs industry standard g-code. See here for a sample of what it actually cuts:
http://d5robotics.org/Content/View/942/No_Title

On top is the aluminum plate we had cut at our sponsor’s place on a waterjet. On bottom is an engraving of the same plate into a piece of MDF. It’s capable of cutting through but would have had to do multiple passes (we didn’t set it up for that in this case, just testing accuracy). If you hold the aluminum plate on top of the MDF, they match up exactly.

Curious, what steppers are you using, and what voltage and current do they run at?

Curious, what steppers are you using, and what voltage and current do they run at?

We’re using 387 oz-in steppers running on 48V. They have 1/4" shafts with a flat so we just used lovejoys to connect them to the leadscrews. You can get these at KeilingCNC - http://www.kelinginc.net/index.html

Ok, call me a fool…but can someone explain what’s making the noise and how?

Ok, call me a fool…but can someone explain what’s making the noise and how?

It’s my understanding that it is the step (Do I have that name right? ) motors that cause the sound. It happens on all CNC machines.

It’s my understanding that it is the step (Do I have that name right? ) motors that cause the sound. It happens on all CNC machines.

But how do they make the noise? I want to understand the physics.

But how do they make the noise? I want to understand the physics.

Are you familiar with how stepper motors work? When electricity is applied to them, they go one “step,” so in order to get them to move a full rotation, electricity has to be turned on and off and back on multiple (or actually hundreds/thousands) times (depending how many “steps” per rotation the motor has).

To get the motor to go at different speeds, you turn the power on and off at different rates. Pulsing something at hundreds of times a second creates different notes. For example, when you hit a tuning fork for the note “A,” it vibrates at 440 Hz.

Thus, moving a motor faster means faster pulses, resulting in a higher note. And slower gives you a lower note.

Using this as a reference point:

A stepper motor or step motor or stepping motor is a brushless DC electric motor that divides a full rotation into a number of equal steps. The motor's position can then be commanded to move and hold at one of these steps without any position sensor for feedback (an open-loop controller), as long as the motor is carefully sized to the application in respect to torque and speed. Switched reluctance motors are very large stepping motors with a reduced pole count, and generally are closed-loop comm...

Basically, stepper motors differ from normal motors in that they move to certain, pre-defined rotations instead of just rotating at an RPM approximated by voltage. So you send a signal to a stepper motor, it moves one step (usually 1/200th of a revolution or so), and you send another and it moves another step, etc. (slightly more complicated, but the wikipedia article can tell you that).

Since it’s not a constant motion (it’s stop start stop start to at least a small degree, even when “smoothly” rotating) there’s a vibration created. The frequency of this vibration is the rate at which you’re sending pulses to it, since this is the speed that it’s stop-starting. Kind of like turning a voltage on and off to produce a square wave sound. In our case they’re mounted to metal plates, which amplifies this in a way similar to a drum. So if you control the rate at which pulses are sent, you can change the note/frequency they produce.

All based on intuition, though, so if someone has a more accurate answer please feel free to pop in.

Think of a stepper motor as a servo motor that can spin 360 in increments at a time. D5 nice little unit and good thought of using that to prototype cnc parts. .

This is fairly related to stepper motor sounds, or at least the theory behind it and how you can purposefully create them. Although, it’s interesting, but not actually from normal use.

Music Theory and control behind it

Thanks all, I was sure someone could explain it terms I’d understand. I’m not so good with tool knowledge, so anytime something can be explained without the assumption that I know a tool…it is most appreciated.