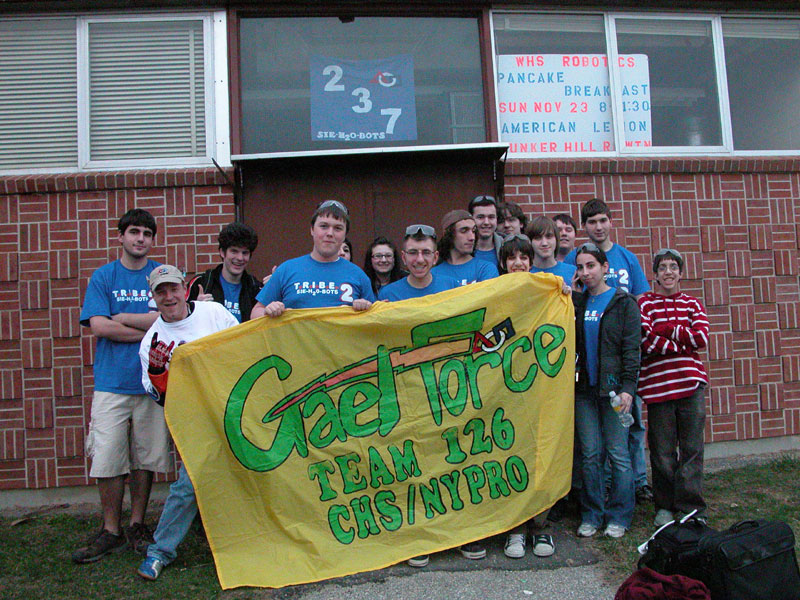 Not enough of the team is talking on cellphones for it to be a REAL 237 photo.

congratulations guys, that was a blast fighting you guys till the end, guess we will have to wait for Battlecry, we knocked you guys out in Boston, and you guys beat us at Hartford, so Battlecry will be the tie-breaker (I wouldn’t mind teaming up with you guys though). and now you guys don’t have to be quite as mad at mike for training our driver

Congratulations to 1902 and 1155 as well, wow 1902 you guys were amazing at pinning and making buzz’s life hell in those two matches, it was pretty amazing seeing the power you guys had taking on 121 as well, shows you don’t necessarily need a fan to be win a pushing match. having three scoring robots on your alliance really made things difficult, especially when they are all good offensive, and one is an amazing Defense.

And thanks to 175 and 743 for being awesome alliance partners, I am Team 1100’s Drive team coach and I remember looking over in the QF’s and seeing 743 pinning 1073 and 228 at the same time and just being like how the heck… and watching buzz score the super cell at the last second was really awesome as well

all in all an awesome competition, and a great year to end my Student career in FIRST. I can’t wait to become a mentor next year.

I think we might of left something behind… lol
again thanks and thanks to 1155 and 1902.

Capture the flag: FIRST Style is always a fun event to take part in eh Tim?

I think we might of left something behind… lol

Yep. lol
I offered to bring it to your team directly in Atlanta, but I believe we are just sending it via snail mail so you have it for your trip down there!
(And I didn’t want to be the one who brought it back to your team after seeing that video you released early on in the season with the 300 theme!! :ahh:)

Congratulations to Team 126 on another well earned victory this year!
I will see you all in Atlanta I’m sure, & come by to make sure you got your flag back!