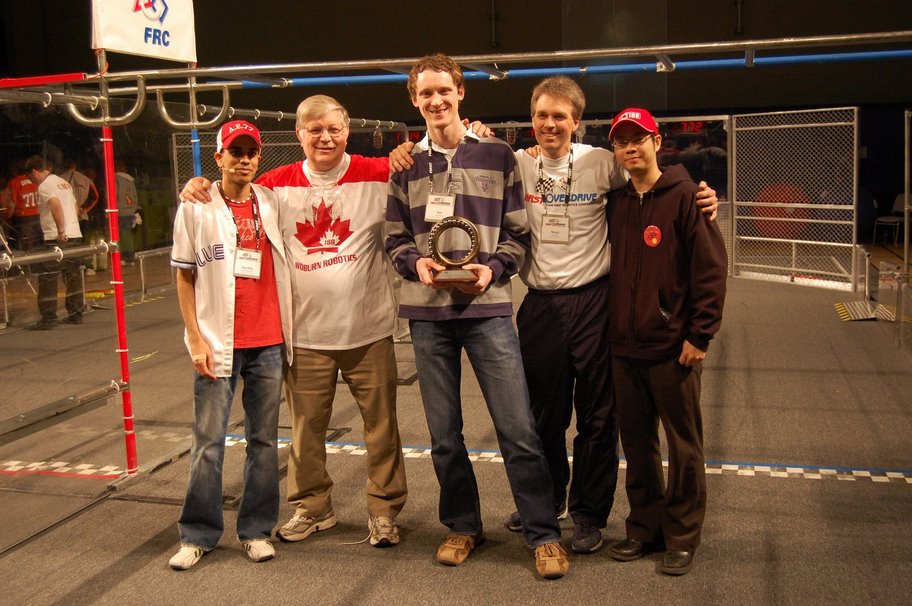 I know there has been a lot of congratulations handed out to Ian in the Waterloo Regional thread, but I found this amongst Pat Fairbanks’ photographs, and felt it had to find its way on to CD.

First of all, to echo the many before me: congratulations Ian! Despite not knowing you for as long as many others, what I have seen and learned in my experiences with and around you make it easy to say that there could be no better candidate for this award than yourself.

Secondly, this photograph is simply epic. Five years, five WFFA winners, all from the original Canadian team in 1998.

You have done both Team 188 and the FIRST community proud. Congratulations to all of you!

Simply amazing. Congratulations to each one of you!

The best part of this is the circle that has been started. The students have now become mentors that are being recognized. This shows how truly great the program is and what great mentors Roly and Mark are. Congrats to all, you are all more than worthy.

Congrats to Ian and all previous WFA winners from Team 188. Team 188 is definitely a role model FIRST team in a variety of ways and have inspired many (including myself

) . I have had the pleasure of meeting the team and many of it’s alumni and I’m sure there are many more WFA winners to come from this amazing team.

Wow! We thought it was cool just to have five WFFA winners present in Seattle, but to have five all associated with one team… simply incredible!!

I would not be at all surprised if somewhere in this photo there is a future Championship WFA winner. At least I’m hoping there is! Congratulations to Ian and to team 188.

Just to reiterate what everyone has said, this is truly an amazing accomplishment not just for Ian (my congrats to him, definitely deserved), but an honour for the WFFA winners before him who he had worked with in the past. In addition to this, Tristan Lall was awarded the Volunteer of the Year Award. That makes 5 Volunteer of the Year awards traced back to Team 188, in addition to the 5 WFFAs. This is certainly an achievement, that is to our knowledge, unprecedented in all of FIRST.

Here’s a link to the video of Paul introducing all the past Canadian WFFA’s and announcing Ian’s WFFA. Pretty epic.

Some of my most memorable moments in FIRST were from the 2006 GTR.

The “Triplets”, Karthik’s stellar job as an MC, the Team 4 “One-day Wonder”, floor hockey and dodgeball with 188 at Woburn were special, but Shawn Lin’s WFA was definitely the highlight of that regional.

Congrats to Ian - the strong tradition of Teams 188 and 1114 in FIRST is again honored most appropriately.