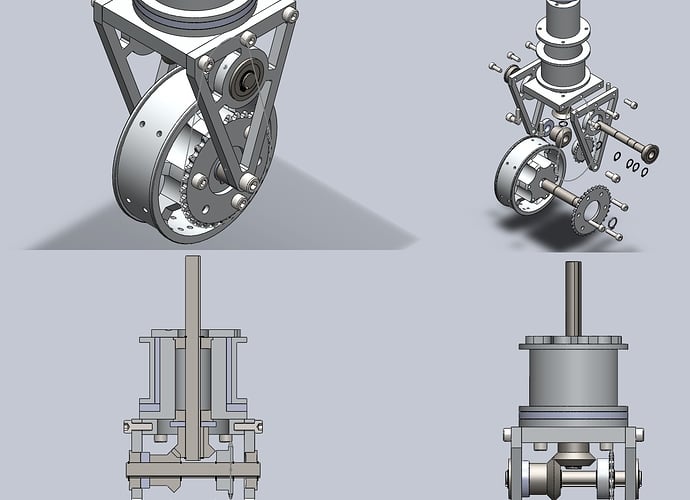 A crab module that I have been working on for the past few days. As you can probably tell, I have borrowed heavily from the designs of Team 118 and Team 221’s Revolution Swerve.
The module weighs about 3 lbs.
Akash_Rastogi January 1, 2019, 3:19am #2

The module looks pretty weak at the bottom. Be careful how much you’re pocketing that.

Agreed - that module is going to fail when it gets pushed sideways on carpet.

We built a 4 wheel pivot for last year. You can get to all of our drawings and calculations here DEWBOT VI Drive Train. One of our mentors (GDeaver) figured out a easy way to mount the tread on the wheel, you might want to look at that. (His posts are linked in the main article)

Our pivot has more material than yours for support. It’s been through 2 regionals and 4 off season and is still in good shape. You might want to add some more support.

The module looks nice. You’re probably only saving like a half pound with the side plate lightening, so I would just get rid of the lightening below the bearing.

The only other critique I have is that this looks exactly like the 221 module. While I don’t suggest changing the design for the sake of being different, why not just buy modules from them?

I’ve just posted as a picture the basic drawings of 1640’s Pivot. As Foster points out above, these pivots have gone through 6 competitions, 3 extended demos and a great deal of practice driving. They are sturdy and have held up to abuse extremely well.

2010 was our first year of using Pivot drive, but we started down this path last summer with prototyping, mathematical analysis, software development and (CAD) designing. By the time we actually built the working prototype on robot-scale, we had already gotten to version Mk 6c! That said, if you are looking to use pivot next year, you’re starting your design process at the right time.

We used roller bearings for the co-axial drive shaft in lieu of ball bearing races. The smaller profile allowed the use of a 1" OD pivot tube.

First of all, Welcome to ChiefDelphi!

I have a sample side plate from 118’s crab module talk in 2009. The teardrop design is the strength of the side plate; to be honest most of the material that is not on the edge of the teardrop is excessive weight. The hole at the bottom of 118’s plate is ~0.2", and all pocketing on the teardrop leaves a width of only 3/16" wide behind. The plate is 1/4" thick. I estimate the fillets at either a 1/8" or 3/16" radius as well.

The poster’s particular teardrop design looks exactly like 118’s except it looks like there’s 1/4" worth of material left after pocketing instead of 3/16" (i.e. stronger if anything). The fillets on this design look somewhat small, which is the only thing I would suggest changing for a prototype.

I doubt the module will fail due to racking for the simple fact that the bottom axle is a dead axle. The axle also serves as a strut to complete the “box” support that keeps the module from racking (laterally failing, leaning, flexing, however you want to put it). The talk linked above gives more details.

… While I don’t suggest changing the design for the sake of being different, why not just buy modules from them?

Perhaps they want the experience in getting feedback on a proven design. Or, better yet, perhaps they’d like to try their hand at innovating the design? It’s far from perfect since it’s still quite expensive to produce. Perhaps I’ll post an idea I’ve had for a few months on how to further progress the coaxial crab module design.

I’ve just posted as a picture drawings of our 2010 pivot design. As Foster points out, these pivots have been through 6 competitions, 4 extended demonstrations and a lot of practice driving. The design has held up to abuse extremely well. Our 2010 robot was our team’s first pivot bot. Being pushed or rammed sideways is no problem.

We began this design process last summer, so if you are looking to be able to use this next year, your timing is right. We started with a VEX-scale prototype (mounting a cRIO) on which we did motion-control and software development. Then went on to documenting the driving math. Finally we started designing pivots using Inventor. We went though 6 major and more minor revisions before we were ready to build.

I’d recommend that the transfer axle (flanged ball) bearings press in from the inside of the assembly, not the outside. As shown, they are likely to come out (in fact be pushed out on the gear side).

This allowed the use of roller bearings for the coaxial drive shaft. Since the roller bearings have a smaller OD than ball bearing races, we were able to keep the pivot tube 1" OD.

We also used a thrust bearing to bear the load of the robot on the pivot’s top.

why not just buy modules from them?

Cost, for one. Our labor is free (that makes us robot slaves, right?

No sin in copying an excellent design. Different for the sake of different isn’t necessarily better.

One of the primary reasons for the similarity is because I do not fully understand how many coaxial swerve modules are mounted. I recently figured out how to mount a module to a chassis because of their drawings.

JesseK, thank you very much for linking that presentation. I found it quite helpful. I expect that I shall be looking at other presentations from that website in the future.

Unfortunately, my team would probably be unable to produce such a module next season due to our lack of manufacturing resources (we currently have 2 drill presses and a band saw). However, we should be able to in later years once we update our shop with money from a grant.

Unfortunately, my team would probably be unable to produce such a module next season due to our lack of manufacturing resources (we currently have 2 drill presses and a band saw). However, we should be able to in later years once we update our shop with money from a grant.

There is plenty of time between now and next season. Look around your area and see if you can establish a relationship with a machine shop nearby. Even if you don’t use them to build a crab module, at least you will be adding a resource.