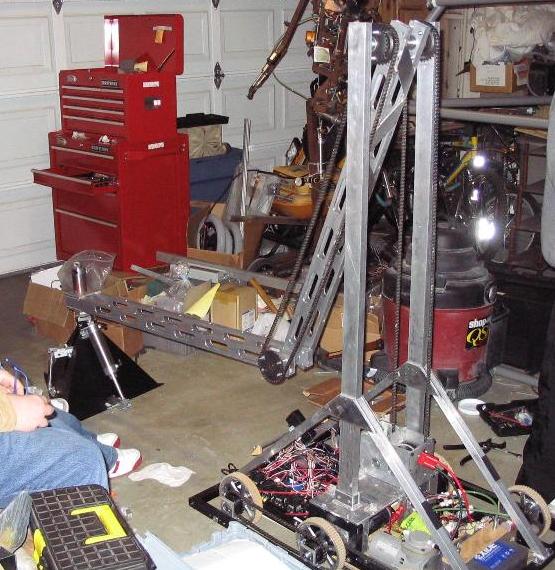 THe black tetra looking thing at the end is our grabber. It is mounted on a ball joint that allows it to pivot 50 degrees in any direction as well as spin. We can lock the ball joint so that the grabber is perpendicular to the arm. With the ball joint we can simply slam down on a tetra and the grabber will automatically rotate. Then using pneumatically controlled levers we can pick up a tetra. We have engineered to pick up 3 tetras though due to weight we may have to drop down to 2. We’ve also had some troubles with our arm gearboxes (not in pic). A couple worm gears were stripped because they were too small. We have switched to a bigger, more robust worm gear that is cast iron. They seem to work well now.
Rick_TYler February 23, 2005, 2:19pm #2

Hey, you guys said you stripped worm gears and are moving up to cast iron right? Our team stripped an iron gear and have upgraded to steel. Not much heavier, but you can get some pretty strong steel that might save you in a match once someone bangs into your arm in the wrong way.

Also, are you planning to leave your drive train open? Not a huge issue, but arms have way of making drive trains stop working if the arm contacts a chain.

The bot looks great, congrats on a job well done.

nice arm thing. cool robot. and in a garage too :ahh: ! that deserves some mad props! nice job!