pic: Dean and Giuliani at Kickoff 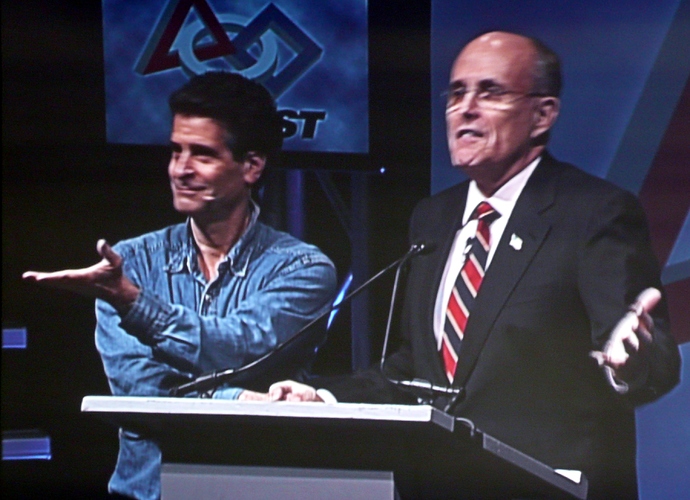 Dean Kamen getting Rudy Giuliani to promise to let “anyone who wants” come to the White House if he wins.
ahecht January 5, 2008, 5:24pm #2

Giuliani’s appearance got a mention on NPR, where the reporter sounded very skeptical about whether the appearance was a good move for him. Audio of that story should be available at 7pm EST at http://www.npr.org/templates/story/story.php?storyId=17872698

I think it’s great he is appearing and seems interested…but I won’t like it if it’s just to get votes. We will see if he continues to show up to these types of events. (I’m not trying to put him down, he has many good policies, just being realistic)

go to the white house anytime i want…he has my vote (if i could vote) or does this just mean if rudy wins Dean will rule over us for 4 years…i mean he did get rudy to make that promise…DEAN KAMEN FOR PRESIDENT!!!

Dean had asked him if the winners of the Championship could visit the white house, and he said something like “sure, the winners, the second place team, anyone who wants!”.

The audio is up on NPR at http://www.npr.org/templates/story/story.php?storyId=17872698. The bit on Giuliani at Kickoff starts at 3:07 into the audio clip:

Yes, former mayor Giuliani was back in New Hampshire. He went to an event today for a [slight laugh] robotics competition and entered on a Segway, and sort of made this [laugh from anchor] jerky, bump and go entrance, which was probably not the best photo op, but that’s what he did.

There was more coverage in from Newsweek at http://blog.newsweek.com/blogs/stumper/archive/2008/01/05/rudy-vs-the-robots.aspx:

Giuliani rode into the gymnasium on one of these electric, self-balancing human transporters. The reasoning was obvious: Dean Kamen, the device’s inventor, is also the founder of today’s robotics competition (he introduced Rudy), plus the crowd was packed with people who are, you know, into robots. Fun, I suppose, if more G.O.B Bluth than Jed Barlet. (No one looks presidential on a Segway. Or sane.)

But Giuliani overdid it. First, he joked that he could “shake three times as many hands” aboard one of Kamen’s contraptions. No one laughed.
Giuliani then launched into full pandering mode, using the Segway–which he called “what I rode in on, the thing I just rode in on,” unable to remember its name–as an example of how American innovation can keep us competitive in the globalized economy. “It’s as needed in China and India as it is in the United States,” he said, stretching the definition of the word “needed” to its breaking point. “I can tell you that it’s needed more in India with the number of people and the crowded streets.” Right. Because putting one billion people on giant two-wheeled scooters is the perfect way to decrease congestion.

But Giuliani wasn’t finished. Repeating his joke that he “could’ve done twice as much campaigning if I had that thing”–again, no one laughed–Giuliani pledged to “introduce it as a necessary part of campaigning.” “Wait until you see me going up and down the streets wherever we go next,” he said. “South Carolina, Florida. I’ll try it even on Fifth Avenue. That’d be pretty cool, right? The ex-mayor going up and down Fifth Avenue on one of those things.”

There were so many candidates and so little time that some of them were forced to go to unorthodox ends to win attention. Rudolph W. Giuliani of New York, whose campaign has shown little signs of traction here, rode into his first speech of the day, at a robotics convention in Manchester, on a scooter.“This is fascinating,” he said. “Unbelievable. I think I’m going to keep it.”

Didn’t like the dismissal of it by the speakers, but it was awesome he was there nonetheless.

Wow, those reports seem rather rude. I would expect better from Newsweek and NPR.

When did Mr. Giuliani appear at the Kickoff? I watched the webcast at VCU, and I never saw him on screen!

Wow, those reports seem rather rude. I would expect better from Newsweek and NPR.

Well (to keep politics off the forum here, just adding background) Rudy’s campaign right now is kind of a joke due to his poor performance in Iowa and the idea he picked up stakes in NH to go to FL for more support.

When did Mr. Giuliani appear at the Kickoff? I watched the webcast at VCU, and I never saw him on screen!

He didn’t appear on-camera. Dave Lavery has some insight as to why here.

And also this from Thursday?

I figure it’s for votes and I do not support his ideas… at all (not a fan of fear driven propaganda). Non the less dean has the most power in this picture, and it his power to change peoples lives for the better, and thankfully… it’s in the right hands.

but hey, these aren’t political forums.

This topic is discussed on FIRSTruth this week.