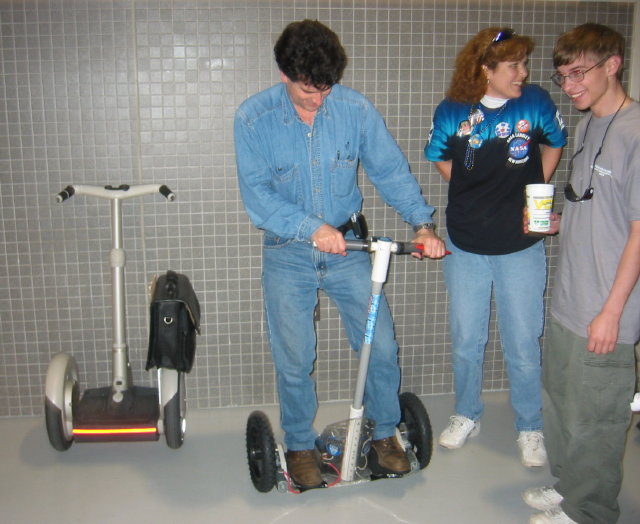 Dean balances the “Knight Krawler”, which was Team 122’s pre-season project. Most of our students got to work on it and ride it.
Getting it to self balance is the next step. Time permitting.

No surprise that Dean prefers his Segway to our version!
But we still like our 31 lb two wheeler!

There had been a bad steering potentiometer which was replaced, but not before Dean tried it…sorry about that!

I am sure he could appreciate the project and the impact
it had on our students from a tech standpoint, but he wasn’t going to trade his for ours! But Hey! he is smiling!
I wish I had been there to train him to ride it! There are some good hints to make riding it easier.

Hows it work? I asume just one big gyro in it somehwere? Can u give me a list of what parts you used, motors, stuff like that?

yes, an article in PitNews.org will be out soon.
Window motors
Victor 883s
2 3/4 turn pots
PIC chip for smooth programmed motor control
We will install the kit gyro sometime soon but now
the rider is the gyro. Fun to ride!

Did yours come w/ the $5k price tag?? A great fundraising idea! Sell knockoff Segways (Begways) for less and get flush w/ cash!

This is no money making venture period! If I am allowed to put out the drawings to the FIRST community (free) so other teams could make their own, that would be great. It would have to be alright with NASA, and if Dean says “I don’t like the idea of that.” well I guess you are on your own also. Dean is the man.

BTW jp …I like that… “Begway” we did have a hard time trying to name this thing of ours!

You’ll notice that he didn’t let us ride his segway! (I’m the guy in the picture, by the way; the one that isn’t on the segway, if you couldn’t narrow it down.)

But speaking of naming the thing… what does everybody think of segfault? No one on my team liked it – I had to explain it to them everytime I mentioned it. Oh well. Maybe if I can get some support here we can get rid of those “Knight Krawler” labels. By the way, Mr. Fahringer, a night crawler is listed as

: EARTHWORM; especially : a large earthworm found on the soil surface at night

Isn’t segfault so much better?

So…Explain that “Segfault” thing again Mark.
As one of our programmers, how are you and Stephen coming along with the self balancing code? Will it be ready by the Nationals? You can call it Segfault at the Nationals if it self balances…how’s that for incentive? (the 2003 Nationals only!)

I’m the guy that took the picture, right after this, Dean said “I like mine” then sped off, came back, and almost ran me over

it was SO COOL!

I think that is a really ambitious project you guys had going. How effective is it? I mean performance-wise? I’m impressed that your people could build this ‘begway’. Maybe you should photo-shop the segway logo into something to fit yours and make a shirt with the begway logo on it

and show it off at nationals. I think it would be really neat and I’m looking forward to nationals this year. I’ll be sure to come check you guys out in the pits.

Congrats on building it, that is really impressive.

How effective? I can list some of the things I have been able to do with it.
I have climbed the 2003 ramp straight up as well as in a zig zag tack pattern like sailing. This was with the low geared trainer
Knight Krawler no.2 Turns on the ramp angle are wild!

I have gone down the ramp on both Knight Krawlers, the fast one
is an experience, you have to make sure there is no turning input at all …and you go onto the downhill very straight.

I have tried balancing teeter totter fashion like the 2001 game.

I have ridden the trainer machine on a long narrow table with 180 degree turns at each end. ( made mpg with PeterGunn soundtrack)

I have ridden the thing all the way around the VCU seigal center and visited most of the pit aisles. The fast one is a handful for beginners, but both are absolutely safe!

The thing breaks down with a screwdriver to fit in a standard suitcase!

I have already looked into a logo and I might pursue it harder now that you remind me! But no “begway” or seg-anything…it’s “Knight Krawler” because we are the NASA Knights!

Like the aptly named “no-hander meander” and the “one-footer disaster” (not as bad as you might think; I’ve actually perfected this last one).

And it’s good for other things as well. For example, the merest mention of the segway (pardon me, the “Knight Krawler”) is enough to get Mr. Fahringer’s attention – no matter what he’s doing! Talk about effective.

Oh, and if you weren’t planning on coming by and seeing our Knight Krawler, here’s something that might change you’re mind: 10 to 1 we’ll have self-balancing code in there by then! A couple more additions to our autonomous mode to make it more accurate/reliable and we can start working on it!