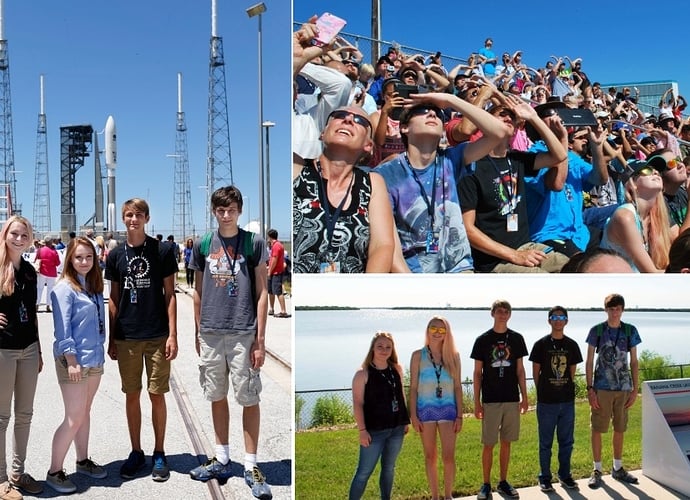 On Friday, June 24, at 10:30 a.m. the fifth Mobile User Objective System (MUOS) launched from Cape Canaveral, Florida, to eventually reach Geosynchronous Earth Orbit 22,000 miles above the Earth. Among the crowd watching the launch from the Banana Creek viewing site were five high school students who are Dean’s List winners from each of the three Florida FIRST® Robotics Competition and the FIRST® Tech Challenge championship events. Lockheed Martin invited these students and a family member to join the friends and family of the MUOS team watch the launch as part of the Launch and Learn program.

“The launch was exciting, amazing and beautiful,” said Varun Singh, a 16-year-old student from Middleton High School and Dean’s List winner from FIRST Tech Challenge Team 4997, Masquerade. “Going to space is truly the greatest feat of engineering, and I am honored to be given the opportunity to experience it close up.”

“This was a great experience,” said Jesse Nasgovitz, a 16-year-old student from Eustis High School and Dean’s List winner from FIRST Tech Challenge Team 5937, Renaissance Robotics. “Talking to Lockheed Martin engineers was awesome because someday I might be doing the same thing as them.”

four of the five students attended a program briefing to learn more about the MUOS program and its capabilities from the contractors who built it and the Navy customer, followed by a photo opportunity up close to the rocket.

“From showing off my robot to future co-workers to seeing a launch up close, this whole experience has been amazing!” said Stephanie Dawson, an 18-year-old student from Rockledge High School and Dean’s List winner from FIRST Robotics Competition Team 233, The Pink Team.