pic: drive module with shifting and up to 4 CIMs/mCIMs2 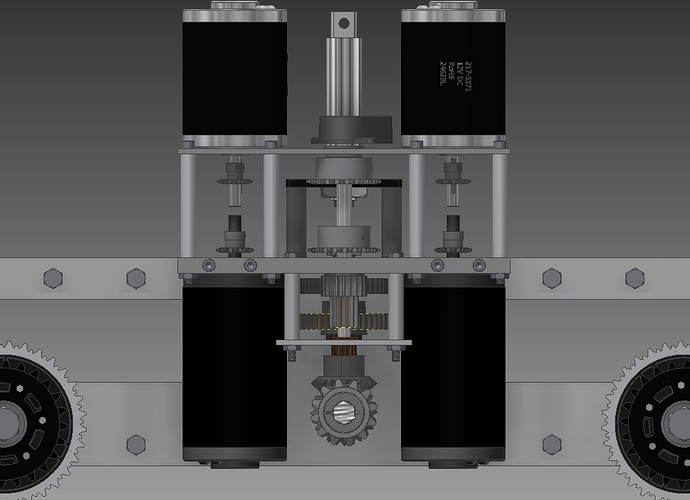 That’s really cool! I was wondering when I would start seeing 6+ CIM drive parts show up on CD. It seems to me like you are running chain between the CIMs and the middle vertical shaft, but I don’t know how well chains will work at this speed. You may want to consider using belts instead. I know teams have used 5mm pitch HTD belts in place of chain on drive components, and it works out well if the center to center distance is exact. Out of curiosity, where do you plan on buying the miter gears from? Also, what is the thickness of the gearbox plates? It’s hard to tell from the pictures, but the lower plate seems thicker than it needs to be.

Thanks for the feed back on the belts I did have worries about #25 chain on that assembly. Miter gears are based of McMaster Carr part number 6529K16: http://www.mcmaster.com/#6529k16/=nhu73m the cad model came from this web site: http://www.rushgears.com/Tech_Tools/PartSearch8/partSearch.php. the plates are 1/8, 3/8, and 1/8 top to bottom.

You could gain a fair bit of efficiency, at the expense of some maintainability, if you joined the shafts of the CIM and MiniCIM on each side using a flex shaft coupler, so that you could use only one chain per motor pair.

The reason I had joined the two miniCIMs to to each other was to get the output rpm (6200) closer to that of a full sized CIM (5310). That said I was never really clear on if that was necessary.

AFAIK, the miniCIMs were designed to be used alongside full sized CIMs in drives, so you should be fine. For more information about matching motor free speeds, see this post from Joe Johnson.

I’m not convinced anything past 3 motors per gearbox is worth it (diminishing returns and all), but even without the MiniCims I really like this gearbox. It essentially takes up no space, since most teams never use that area of their robot for anything else.

The reason I had joined the two miniCIMs to to each other was to get the output rpm (6200) closer to that of a full sized CIM (5310). That said I was never really clear on if that was necessary.

I’d explain why you don’t need to do that, but Paul Copioli does it better.

I agree with running cims and mini cims 1:1.

As far as chain/belt for the cims, I would suggest using 3mm pitch GT2 profile timing belt. This is what we used this past year and I know some other teams did as well. Just make sure that there is enough rap around on all the pulleys.

looking at the miter gears, you’ll need to make sure they’re very well supported and have thrust bearings in place to deal with the thrust loads. We’ve used the needle thrust bearings from mcmaster the past two years with success.

I like it so far, but there’s always room to make it smaller, simpler, and better

Nice design, but I kinda share the sentiment that this might be a little overkill with the motors. I may be wrong, but unless the motor rules are changed from last year, you can’t have more than six of any CIM motor on the robot. Otherwise, Very Nice!

NEver mind, mini Cims are listed separately from Cims. I guess i have nothing to say now…::rtm::