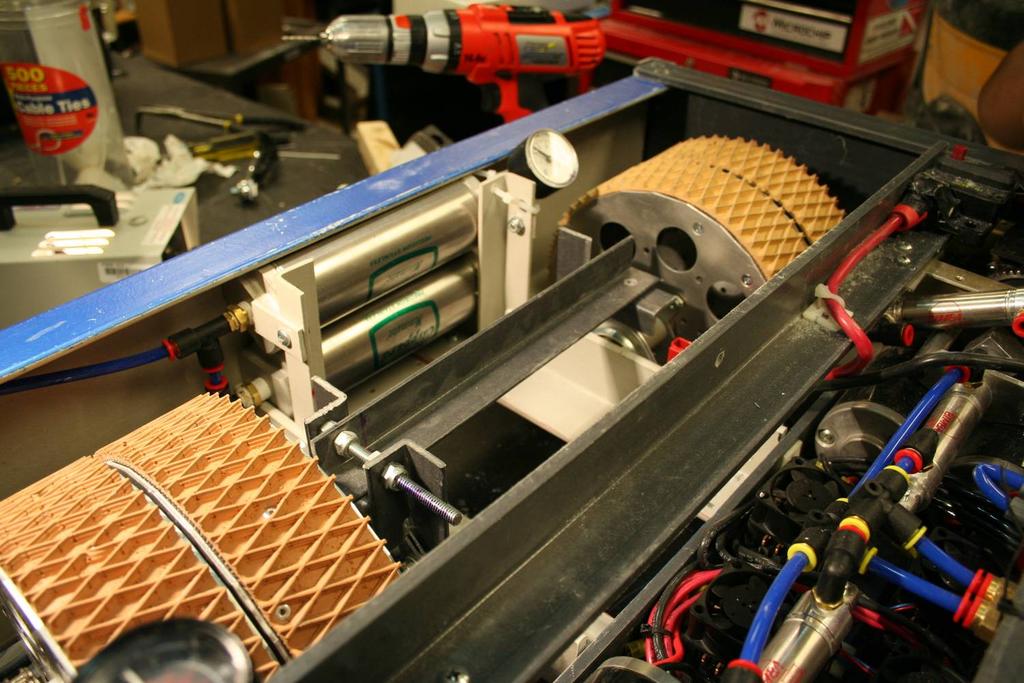 How did you determine that double wheels will give you better traction? To me, even one of those wheels seems pretty wide.

Friction force does not increase with a higher surface contact. The reasoning behind that is due to the force in between the surface and the wheel, in this case the robot weight. A larger area between the wheel and the carpet would create a larger source of frictional forces, but it reduces the pressure between them. The same force dissipated over a larger area with the same coefficient of friction is equivalent to a smaller area with less sources of friction forces.

Basically since your robot weight is a constant and your CG is the same with both smaller and larger wheels, your traction actually does not change. The only thing that could be reasoning for this traction wise is more surface contact while on the ramp. If a smaller wheel looses contact with the ground it would have no friction, such having larger wheels would have less of a chance of loosing contact with the ground.

So in this case i think sanddrag has a point but you never know the reasoning behind their decision.

Why didn’t you just go with the roughtop for more traction? It has a higher coefficient of friction than wedgetop and costs the same.

It might also be overkill though for your design for dual roughtop.

I’m still puzzled as to why you shortened your chassis, presumably to help the robot turn more easily (or to facilitate picking up balls), and then put a shifting transmission on the bot, driving omniwheels in front, and traction wheels in the back.

You should have been able to get away with just the shortening of the chassis., and still be able to turn with 4 traction wheels. Using omniwheels and a powerful transmission just seems like you’re shortchanging yourself.

Why didn’t you just go with the roughtop for more traction? It has a higher coefficient of friction than wedgetop and costs the same.

It might also be overkill though for your design for dual roughtop.

really? i thought it was a more opinion thing… anyone test this on diamondplate btw?