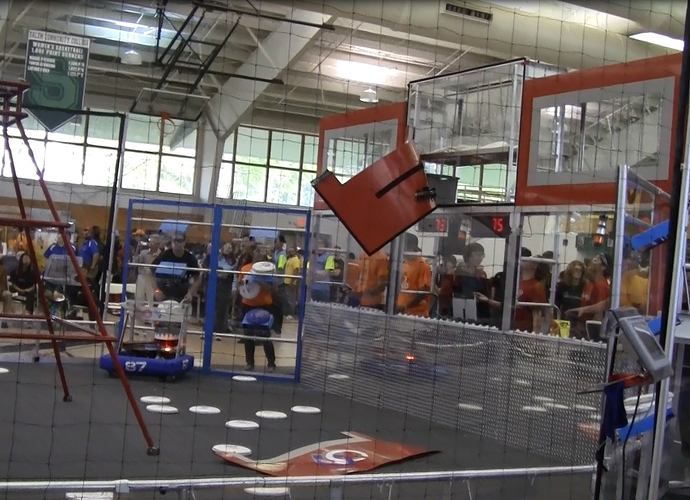 They were actually about to RESUME the match after they fixed it, but it was brought to light that a single disk had been scored after the size of the goal got larger, forcing a replay.

The MAR 2013 field has seen its better days.

Here is a video of this happening: https://www.youtube.com/watch?v=t5bEOCJRzss

It starts falling around 0:55

I believe something like this also happened on the Galileo field during qualifications, not sure which match though.

They were actually about to RESUME the match after they fixed it, but it was brought to light that a single disk had been scored after the size of the goal got larger, forcing a replay.

I am not exactly sure what you are saying?

I am not exactly sure what you are saying?

If I can translate, this is the timeline:

–The field broke (as seen).
–Someone landed a disc in the goal.
–They stopped the match to fix the field.
–Field fixed.
–They were ready to keep playing the match from the stoppage point.
–Before starting again, someone pointed out that a disc went in when the field was broken.
–Due to not being able to determine whether or not the disc would have been in the goal had the field not been broken, a field fault was declared.
–Field fault = replay.

A similar issue popped up at SCRIW, on the red alliance goals. We foghorned the match, put it back with a little gaffer’s tape, and played on. At the lunch break, we went back and did the same fix on the blue goals. Stuff happens.

I never had the opportunity to test it this year, but in previous years restarting a match mid-stream didn’t always work. Some robots would come back up in autonomous mode.

And of course in official events, the match must be re-run in its entirety for any field fault.

This has happened to us before. What we found out is that you are supposed to power cycle the robot.

Similar thing happened at the CT CIAC Championship in what I believe was Q2. It have to admit it was funny as we were already replaying that match for another field fault when it happened. Needless to say the match was stopped, we all laughed, reset/repair fixed the goal, and the match was started again and we were on our way.

Actually, we scored quite a few in the goal after the dimensions changed.

I believe this happened at the Northern Lights Regional too.

Doesn’t seem like such a “bad” fault. Coulda been worse. There coulda been a robot involved… somehow…