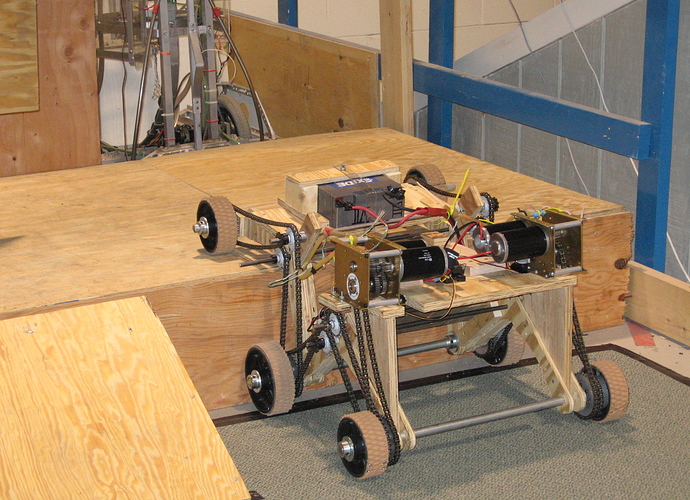 As the next game rolls around, all of you will get to build more robots (woohoo!). I was looking through my old FRC pictures today, and I found a bunch of 1276’s old prototyping pictures. Obviously not much use to us anymore, but I figured other people might be interested in them.

This is a chassis we built between the 2006 and 2007 season to climb a very large stair. We figured that since 2006 had such an open field, 2007 would likely have a large central feature (we were right!). We also really wanted to climb stairs, as we had elected to stay on the floor in our rookie year (2004). Due to all the bumper rule intricacies, a chassis like this may never again be FRC legal, but who knows.

I think it portrays an important point though, prototyping shouldn’t be expensive, or even particularly well done. Quick and dirty works. In our experiences, if we couldn’t get it to work as a quick and dirty prototype, it wouldn’t be reliable on the field.

I don’t think we bought anything to build this, it was all stuff we had lying around after a few years of robot building. This obviously never made it to the field. However, from the pictures I have on my laptop, I put together a small album of things we prototyped, and then the final mechanisms that resulted from them.

If anyone is interested, I’ve got some more stuff at home and could probably put together a short white paper.

And since I’ve had troubles with CD Media and links before, here’s the plaintext you can just copy into your browser:
http://picasaweb.google.com/etotheix/Prototyping?feat=directlink

Very cool! Thank you for sharing.

The prototype pictured is great. More importantly, the point made is dead-on. Prototypes should be fast and inexpensive demonstations of feasibility and testbeds for gathering engineering data. They should be no more sophisticated than they need to be for these purposes.

The time issue becomes especially critical for build-season prototypes. The clock is ticking!

Downingtown Area Robotics includes 15 VEX teams (in addition to FRC Team 1640 and 6 FLL Teams). We have very successfully used VEX parts for fast prototyping in the past (and expect to continue to do so in the future). VEX parts are not suitable for every prototyping need, but they have a good range of utility.

We prototyped a Pivot drive during the summer of 2009 using VEX parts to work out control strategies. We mounted a cRIO and other FRC control components directly on-board (battery was teathered). Photo below.

Wanna go ahead and rename this “2791 Effective Cheap Prototyping”?