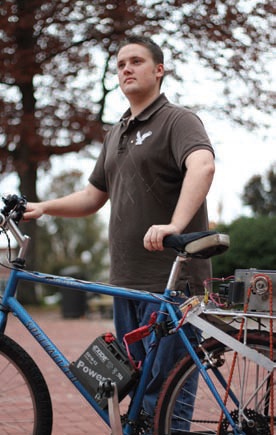 Billfred, caption contest (What is CJ looking at?).

Very cool do you have a link to the article? How about some specs on the ride?

He’s looking at Death Valey (football stadium at Clemson) and thinking of the awesome tricks he’s about to pull off.

How about some specs on the ride?

i was contemplating mounting a cim motor onto by 21 speed Fugi mountain bike. i thot that it would be a good idea to mount it at about 8 inches from the peddles and make it chain driven. the chain would run from the small sprocket on the cimple box...

“It’s electric”
Student Chestley “CJ” Couch takes his self-made electric bike to the streets of Clemson.
by BRADY BROWN
This article originally appeared in The Tiger on November 18, 2011 | PRINT

Throughout his life, sophomore Chestley “C.J.” Couch has always considered himself a tinkerer.

Prior to his time in Clemson, he spent four years on his high school robotics team as well as three years as a coach.

Throughout all this, Couch noticed that the school was throwing away surplus parts.

Seeing this as a waste, he asked if he could be allowed to hold on to them. For about a year, these parts sat waiting in his closet.

On arriving at Clemson, Couch, a Charleston native, found the hill situation throughout campus quite bothersome for the average biker. As a mechanical engineering major, he finally realized a practical use for these spare parts: make an electric bike.

Couch took a 750-watt electric motor (equivalent to about 1 horsepower) and attached it to the back of an everyday, run-of-the-mill bicycle.

It only took a few weeks for Couch’s vision to become a reality. He rotates through five different rechargeable batteries, so whenever he’s on the go, all he has to do is pop one in, and he’s ready to roll.

The top speed of the bicycle is geared down to 7 mph which, as Couch jokingly said, “Is more than enough to mow people down on Library Bridge.”

Living on campus, Couch finds his invention to be extremely beneficial when it comes to getting to class and other places around Clemson.

The bike basically coasts down hills, and the engine just needs to be switched on when facing hills or during long flat stretches.

Couch explained his inspiration for putting an engine on a bicycle.

“I had motors and batteries … I look around and am like, ‘What can I put a motor on?’ … I’m a third generation drag racer so I’m all about power and speed … If it’s mechanical — gears and motors — I’m into it.”

The electric bike is a perpetual project for Couch, as he is always looking for ways to improve it, whether it’s adding a new motor or making slight alterations here and there as he goes.

Couch summed up the benefits of his bike. “For trips about a mile from campus (CookOut or Bi-Lo, for example), I now use my bike instead of wasting the gas and fighting for parking or waiting 20 minutes for the crowded buses,” he said.

“While I could have easily just bought a moped or a gas-power bike kit, I wanted something that fit with Clemson’s green initiatives and put to practice some of the concepts that I’m paying so much to learn.”

“Besides all that it’s just cool to be able to ride something you designed and built,” Couch said.

Couch took a 750-watt electric motor (equivalent to about 1 horsepower) and attached it to the back of an everyday, run-of-the-mill bicycle

2 CIMs is about 700W, so I imagine the article was making a simplification. (CIMplification?..

2 CIMs is about 700W, so I imagine the article was making a simplification. (CIMplification?..

The article mentioned changing the motors so it wasn’t clear if the original design had a 750 motor.

Ether, when was the last time a news article got everything right when it related to technical things? FIRSTers have been complaining for years about minor errors in various publications and articles covering FRC events.

*CJ, did your original design have a different motor?

Also, are you using a motor controller or just a heavy-duty switch to kick in the motors once you’re up to speed?

Also, are you using a motor controller or just a heavy-duty switch to kick in the motors once you’re up to speed?**

I spy a Victor. He might have said it somewhere already, but I’d guess that a “servo tester”-type circuit is in use.

*Just wondering: Does it have a motor kill switch attached to the brake?

*Just wondering: Does it have a motor kill switch attached to the brake?

I believe the sprocket on the gearbox freewheels, so if he stops it just idles. At least from what’s visible in the picture.

Wow laundry list of questions, so I’ll try to hit them all.

Yes I am using 2 cim and I know they put out a peak 674 watts which is 0.903hp (close enough to 1hp) but when dealing with nontechnical media, nice rounded number are easier to try and explain/write.
I control it with a servo tester and two victors. I do have the standard FRC motor kill switch. On the output shaft of the gearbox I have a ratcheting sprocket. I ran it for about 3 miles today and the motors were barley warm and there was still power left in the battery. And Drake was close because the picture was taken at Tillman looking toward Death Valley:p .