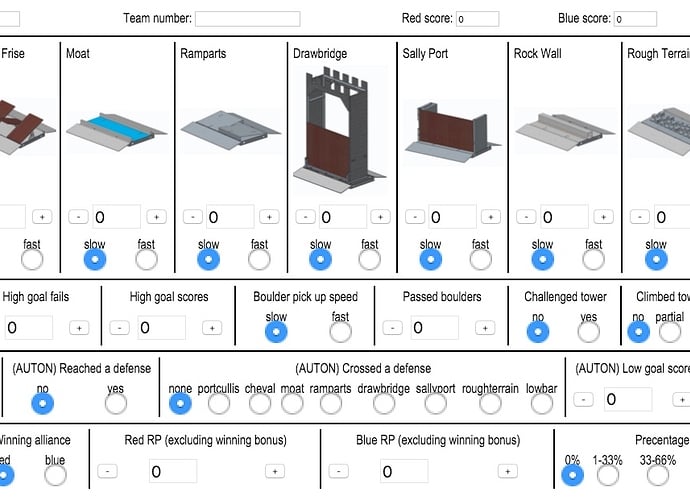 I really like this! I noticed that you said that this is an electronic scouting sheet. Is this something that would be able to be accessed by everyone?

Is this something that would be able to be accessed by everyone?

The idea is that it will be hosted on a LAN and laptops will be plugged in via Ethernet (no Wifi at competition). This is primarily targeted at match scouting, so the entire setup would be stationary in the stands for the duration of quals.

Everything here looks great, but defense is always more of a factor than most people figure early in the season. The real question with defense is how long can you detain/prevent another robot from achieving a goal, and how often to you draw a foul doing so? Perhaps defensive pushing could be something like one push counted per some number of seconds, and add fields for different sorts of fouls.

Perhaps a count of boulders snitched from the opposing alliance’s secret passage?

What program or service did you use to make this?

As I look at this again, I see that “tortuga” is missing. If a robot winds up getting immobilized by a defense, it would be good to know that it happened and on which defense.

I’m feeling like most of the bottom row is a bit excessive, but here is what I’ve come up with.

what program or service did you use to make this? it looks like something you could make in vb but i dont know how you would store it, and how scouts would communicate who they are each tracking

Is this open source?

I really like this form. It is visual and has the items I think we will need. FYI, there is a typo on the bottom unless you meant pRecentage and not percentage. Also, if there would be a way for us to download this, that would be great.

This looks awesome!
Is there anyway you can specify where and how did you make this?
It seems to be ultra-useful and simple.

I realize i probably should have checked this thread earlier…

To everyone wanting to know how I did it, it’s an HTML page that is generated by a Flask/Python backend server. Therefore, any computer with wired internet will be able to access it without installing any apps.

As for code, I’ll be releasing the source once I find the time to finish it. After the build season is over, I’ll actually have free time… It will definitely be out in time for competition.

I may or may not have mentioned that I’m working on an analysis program as well to help aggregate the database.