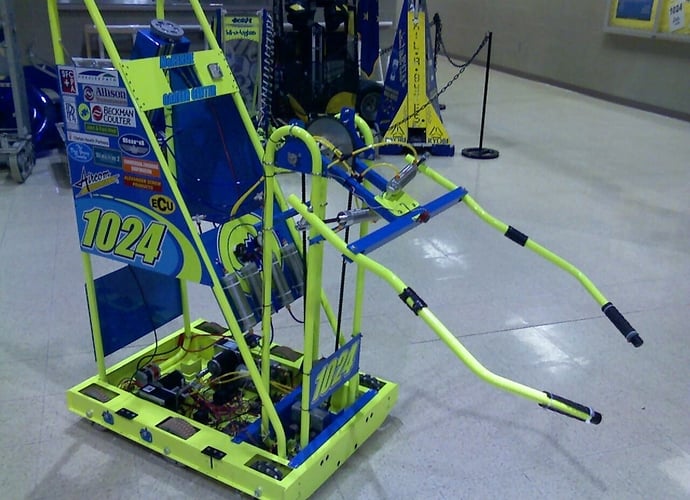 Here’s our finished 2008 robot, without it’s bumpers. It can hit 10ft/sec during real run conditions (not a give-it-as-long-as-it-needs type test), and can complete a ball pickup cycle (auto ball grab, raise to holding position) in about 1 second with a good battery (this process is automatic). The gripper can also be used to push the ball over the line (herd) as well as knock the ball off the overpass.

Hurdling can be done at robot speeds from about 0.5ft/sec and up. The ball can be placed by simply driving the robot to about 2ft in front of the overpass, stopping, then firing.

Autonomous mode, for now, racks up points by running around the track. Hopefully we’ll also have the option to auto-knock the ball off in autonomous as a secondary strategy. As it sits, we’ve found the IR very unreliable, so though it is an available option it’s currently not a part of any autonomous schemes. Also, an automatic gear shifting routine is in the works to increase the robot’s rate of acceleration.

Needless to say… our team has had quite enough of bending pipe for quite a while. :]

GREAT looking bot… love the paint… it looks like it is ready for a nascar race or something:P

Wow.
That might be the prettiest robot I’ve seen this year.
It looks like it glows in the dark!

That looks incredibly spiffy. My only question is, I foresee a lot of accidental bumping, robots are going to be moving really fast this year, how will your manipulator hold up? Are you going to bring some extras just in case it gets bent? Not saying anyone is going to intentionally, but it looks delicate and I’ve seen things like that get all bent up on my robots before.

Thanks for the comments!

Zyik, it does look very fragile in the picture, but all superstructure tubing is actually 1" OD 1/16 wall tubing. We ran the unpainted robot in the practice at Munice this past sunday, so far the robot has accidentally gotten hung up on the rack (after our robot got sped up by being pushed by another from behind) and the arm succeeded in lifting the whole front of the robot off the ground, then moving the whole robot back down onto it’s tires… it’s surprisingly strong.

We have succeeded in bending the crossbar for the front once, but we’ve found we can bend it back quickly using three metal blocks and a big C clamp. Works nicely.

We are, nonetheless, bringing two pair of extra arms (they are symmetrical).