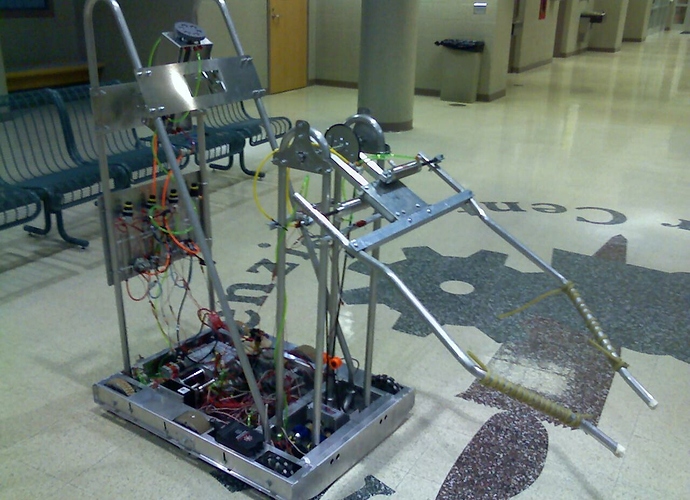 Another view of our first prototype robot, again, I know it’s messy, it was around 1AM at the time, and neatness was not a priority.

The robot is fully functional and hurdles like a dream. After the ball has been gripped, a pickup and hurdle cycle takes 1.25 seconds, and the robot can go as slow as 0.8ft/sec and still make a hurdle. The standard auto-hurdle speed (triggered by joystick during teleoperated) is 8ft/sec, and works like a charm.

And… the super awesome special feature’s mounting locations can (maybe, might not be good enough picture) be seen on the right side of the robot (side facing left in the picture)…

Looks very nice. Am I correct that the two pincers grab the ball, rotate it up to the top, where it is launched? How high off the ground is it tossed?

How well do the claws hold on to the ball? It looks like you have very little surface area, and therefore making it so that the ball must be very precisely positioned, but if it works, it works.

And what might the unmounted “super awesome special feature” be?

You are correct! The ball is grabbed, picked up, released (the ball rests pretty securely between the top two pipe pieces, the hockey puck (whose curve matches that of the ball) and the open arms keep it from rolling away), then six 3/4" bore 10" stroke pistons hurdle the ball. Seperate solenoids are used to shoot and retract the pistons, to allow the topsides of the pistons to be vented before the bottom side tries to push (no effort wasted pushing pressurized air out of the way).

After the ball goes out of contact with the pistons, it travels up another two and a half feet due to its momentum for a total hurdle height of about three feet. The ball starts out being about four feet off the ground, so the bottom of the ball goes to about 7 feet 4 inches off the ground to clear the overpass.

Hopefully I’ll be posting video footage later this week of the robot hurlding as well as running in autonomous.

EDIT Forgot to mention the super awesome special feature. The super awesome special feature is a homebrew nine inch tall by 27" long four character segmented LED display, 3,000mcd red LEDs. It may be shortened to three characters as finding mounting locations while still being able to list sponsors has been… eh… how shall I say… problematic. At any rate, photos (maybe video) of that running to come as well. (As it sits now, it functions, but is a big PCboard with lots of wires hanging out all over. Figuring how to ruggedize it now.)

Looks great. I have one question and am hoping that you simply have a typo.

fully extended that thing is within 80 inches?

from very back of robot to front of arm?

fully extended that thing is within 80 inches?

from very back of robot to front of arm?

Very observent. Yes, it is, once the arm tips are cut to length. Again, neatness was not the goal that early in the morning.

If you’re wondering why this length was on there, in order to make the final bend on the arm pipes, you need a tail for the bender to grab on to.

what’d you use for a bender?

what’d you use for a bender?

lol… we used a steel railing and a football player…haha

Looks like a good bot look forward to video

Nice work… can’t wait to see it in action!

what kinda psi does that take?

The usual 120psi in the two storage tanks, the usual 60psi in the working area of the pneumatic system (and the two 60psi accumulator tanks)…

Nice protoype but it looks like it needs to be cleaned up!

you regulate the accumulator tanks?

i’m guessing that massive launcher thing is your idea of a shock load?