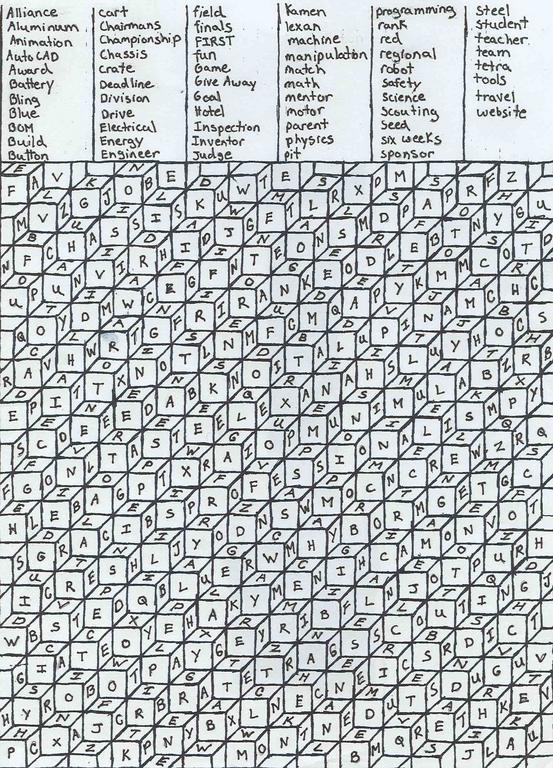 It’s a 3D FIRST wordsearch. I think it turned out kind of neat. It’s a little mind boggling when you first look at it. Words can crawl down the stairs in either direction, go across the top of one layer of blocks, diagonally on the sides of a row, or across the front of one layer.

I had some other words that I couldn’t fit because I didn’t have enough space for them. Sorry if it’s a little big, but if it gets much smaller it looks really confusing.

I have other FIRST themed puzzles I’ve made too. Need to do something while waiting for machines to be free.

I saved it to my computer and will be much fun when I am trying to find things more fun to do than studying.
Eric

OK, I got a quick question…

Are the stairs going up to the right or invertedly down to the left?

You’ve made my head hurt by looking at that… I don’t dare stay up even later working on this thing… Looks good.

Gracibs Professionalism … thats not on the list. What’s my prize?

Gracibs Professionalism … thats not on the list. What’s my prize?

“gracibs” isn’t a word, is it? Professionalism is in there though, as well as torn. That may not be the word you were looking for, but it is there. Also, I found an error. One of the spaces acts as a D and an O. It is the D in award and the O in inventor and those words are no where else in the puzzle. So I’m done, when do we get the next one?

EDIT: TriplePlay is also in the puzzle.

have fun searching for word everyone!! i found a few

Okay now that build is over I can reply again.

I definitely mixed up O’s and D’s in a few places. I had to trace the puzzle in black so my scanner would pick it up, and I must not have been paying attention. Not sure how I mixed up O and B, but I went and photoshopped it to fix the mistakes. If anyone wants a corrected version let me know.

PS - A cookie for Joel J. and tkwetzel next time I see them at a competition, since they found the bonus words even with mistakes.

PPS - To MR. Toast - I kind of like invertedly down to the left myself, but I always see up to the right first.