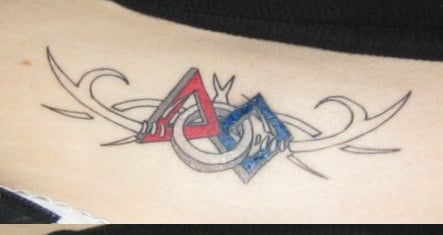 I did it. I actually got the FIRST Logo Tattooed on my body. I love FIRST, and have been apart of it for 8 seasons now (going into my 9th season!). It’s made me who I am today and I’m very thankful for that!

i was having a conversation about this a few weeks ago at the Capitol Clash when people were mistaken that my temp tattoo was real. I was wondering if anyone had done this and i guess i now have my answer.

just a question…did you get approval from FIRST for the modifications to the logo as stated in their logo standards :rolleyes:

Wow. You are certianly braver than me. Looks pretty good too.

Yes i have one tattoo, and i am ready for a second and i was seriously considering this. I like how you put some kind of design for it. I really like it

As for the proper “logo usage” approval- I think that it’s too late for that.

Obviously its on your waist line but is it on the back? Center of the back?

sweet…i was thinkin of gettin one on my inner forearm…did you draw it yourself?

Is logo use a problem if it’s not for advertising or competition purposes? I doubt she’ll be running around using it to advertise.

ya its on her lower back centered…

Filled in absolutely! I’m not sure if a large tribal would necessarily look good though. If it gets too big the FIRST logo no longer becomes the center of attention.

And just for the record, remember those of you under 18, no getting FIRST tatoo’s without mom and dad’s permission.

Woo hoo i will be 19 next week, and that just may be what i do for my birthday.

I’m considering getting a large tribal/Celtic design on my left shoulder next year but I’m wondering what effects body weight has on tattoos.

I think we have crossed a very special line of FIRST obsession.

If anyone gets “I am JVN” tattooed anywhere on their body, I will be quite frightened.

Wow. Let me first start off by saying thank you to all who have approved of my ink. Yes, as Heretic said its in my lower back. And no, I did not get the approval of FIRST before I had this done. But in my defense, I got this tattoo for me, not for the whole world to see and certainly not to promote FIRST in anyway.

To answer some of the underlying questions. Yes, I drew the design myself with the exception of the FIRST Logo. And I do plan on having the white touched up, along with filling in the Tribal. In reference to the pain: The outline was probably the most difficult part. It happens right away and it was thin lines. Filling in the color wasn’t too bad until it got near the spine… and yea, it hurt just a little bit, but the way I see it, the pain was well worth it.

Tattooing a great way to express yourself and get a design that is truly meaningful to you. I contemplated this design for a while and probably drew for a good 8 months before I found my final design. Being that I’m only 18 and still currently living in my parents house, I let them know that I was doing this before I actually had it done. To my surprise my father actually wanted to come with me and watch me get it done. :: Great bonding experience ::

I think we have crossed a very special line of FIRST obsession.

If anyone gets “I am JVN” tattooed anywhere on their body, I will be quite frightened.

That will be the FIRST thing I do when I turn 18.

What will you do when FIRST redesigns its logo again? Will you get your tattoo redone?

That will be the FIRST thing I do when I turn 18.

Let us know when, so we can have the men with the white coats waiting

What will you do when FIRST redesigns its logo again? Will you get your tattoo redone?

Seems like Karen and I are on the same wavelength…because that’s exactly what I was thinking.

I once read a case study for class about the fanaticism of Nike’s employees - who go so far as to have the “nike swoosh” tattooed on themselves.

The difference here is that Nike as a brand placed 30th overall in the world in the annual Interbrand/Business Week ranking of the Top 100 Global Brands, with a value of $10.1 billion - the swoosh isn’t leaving anytime soon.

I can not say it enough, FIRST is still growing, and will be growing for quite some time. It’s still a toddler in terms of age in comparison to other international nonprofits. May the logo change sometime in the future? Absolutley. Will it change anytime soon? Probably not.

As you said, it’s your choice, and I’m sure you thought about all of this before it happened. (Not to mention, I think it’s pretty cool looking). Good for you!

Note: Of course, I’ve met some old-schoolers who still hold tight to the old FIRST logo as a show of their support of what FIRST used to be. May this logo become a symbol for another FIRST-era just like the old logo? Sure. The future is enormous and ours for the shaping.