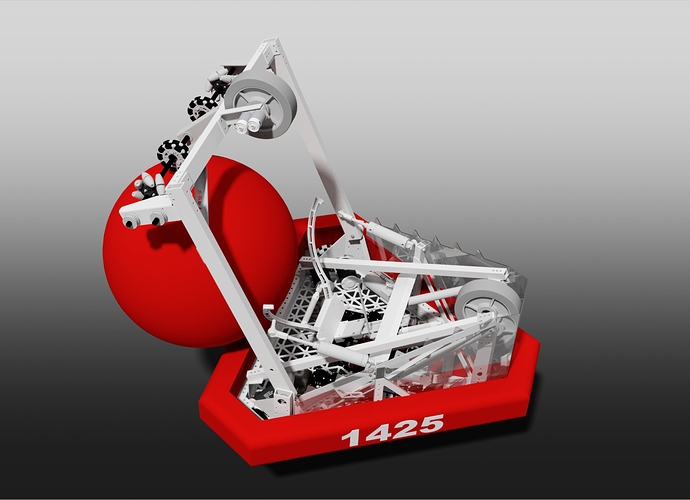 A six-CIM kiwi drive? Well now I’ve seen it all!

I was having trouble figuring out how the whole thing worked, and I think I found a little boo-boo in your CAD

It’s a very cool robot design though. Very elegant and functional, and I’m always a sucker for irregular frame shapes.

Can we get some photos of the real thing?

I don’t have any pictures, but I can vouch for the bot: this thing works. The shooter has the best range that I’ve seen, and they’ve either won or been finalists at each of the 3 events that they’ve been to. (I’ve also been at all of them). I can’t wait to see this thing at PNW Champs this week.

I just love how unique and crazy looking it is, and then it’s one of the best robots in the PNW… not only the longest ranged wheeled shooter bot, but the longest ranged bot I’ve seen. and it’s on a freaking triangle drive! Good luck, and I hope we’re your allies more than opponents at Portland

Can’t wait to see it in Portland! We will be there too. Hopefully we have a match with you guys. Look forward to seeing it in action, not just videos. The shooter looks great and I have seen it make some incredibly long shots.

I was having trouble figuring out how the whole thing worked, and I think I found a little boo-boo in your CAD

The cylinder is connected to nothing in the CAD. For some reason when it was connected Inventor didn’t allow us to raise a lower the collector. So we just leave it unconstrained.

A six-CIM kiwi drive? Well now I’ve seen it all!

Fantastic design this year! That shooter puts just enough backspin on the ball to give it a more linear than parabolic arc, it’s very cool to watch.

We’ll see you guys in Portland!