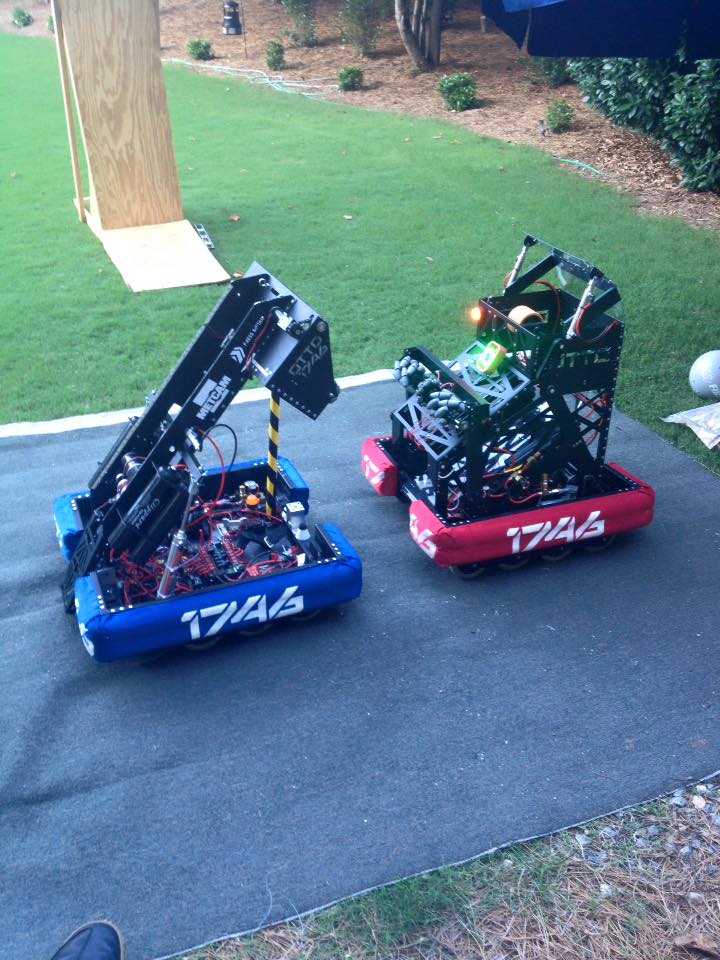 Glad to be back from an awesome weekend at IRI. Anyone attending IRI that was familiar with our regular season bot (left) had a bit of a surprise when they stopped by our pit to see that we decided to make a few “adjustments” for IRI.

The new robot (right) is the result of wanting to make eliminations at IRI. After scoring low goals and scaling during the regular season and champs, we felt like we needed to start scoring high goals to compete and make a run at IRI.

The drive train used on the IRI bot is the chassis from our regular season practice bot. The top module was then designed to work as both a batter and outer works shooter with a two position hood. The redesign took a couple of weeks, and the lead time for sheet metal resulted in us getting the sheet metal back a week (!!) before the beginning of IRI. At this point, I was convinced we wouldn’t be able to pull off the build and would likely end up bringing our low goal bot to IRI. With quite a bit of effort and some highly determined students, we were able to complete the rebuild, leaving us with a minimally tested robot in the days leading up to IRI. We decided to bring the new bot as we thought it would be an enjoyable experience to see if we could get it working at the competition and it also seemed like the puzzle pieces might be there for a competitive robot.

We struggled through our first two matches, but still managed to score a few high goals. We then got things rolling a bit better and scored between 6 and 8 high goals in 5 of our remaining 7 matches. We finished ranked 45th with a record of 3-6. I am very pleased with the results of the weekend considering the situation. Making eliminations would have been awesome, but to see that we can match some of the world’s best robots boulder for boulder was the biggest success for our team. Thanks to all of the teams we competed with and against as well as the IRI crew for continuously putting on an awesome show. We hope to be back next year. Perhaps with a robot with robot that is a bit more tried and tested, but where is the fun in that.