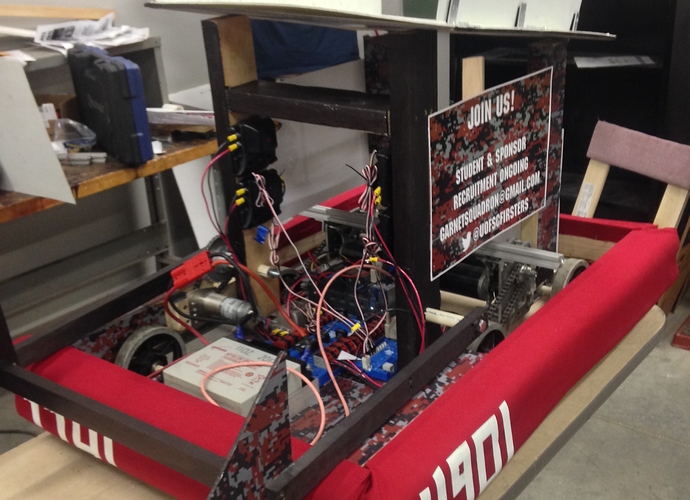 4901’s first meeting for kids was held on September 25, 2013 at the University of South Carolina’s College of Engineering and Computing. SCRIW was October 12. With just over two weeks, a running chassis loaned from 1293, and a handful of kids, no budget, and a knowledge of how loony we were, we threw ourselves into the shop to get something together for SCRIW. The result is what you see here: Sandstorm 0. (Sandstorm is one of the three songs any USC fan has on their phone, the others being “2001” and the fight song.)

It was a 28x38 chassis that we stripped down, rewired, and reassembled; originally, we planned to put a spatula-style floor pickup to load the tray, then dump in the low goal. That didn’t quite pan out (did we mention we had two weeks?), but you can see where we were almost there in the front; the arms would also run the hinged tray up to dump (in theory).

After working through some old-bridge issues the kids were up and running. We finished 4-4 in the qualification rounds and got picked by 1539 and 4451. Not bad for the first try!

(And yes, that is some leftover regolith we found lying around the shop forming the tray.)