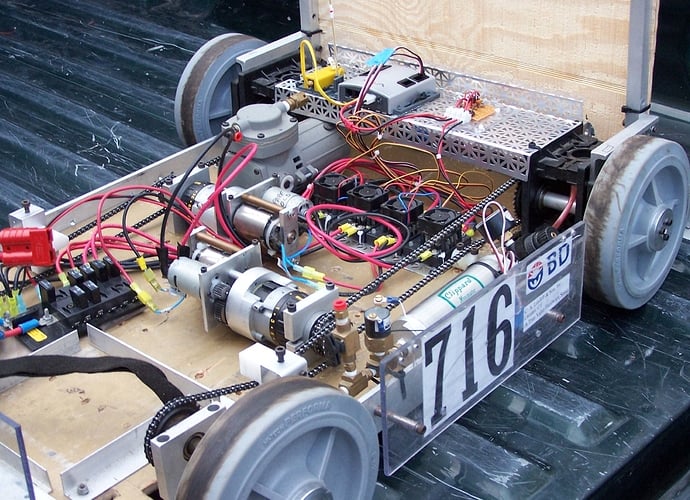 For our off-season project we revamped an old robot with a VEX controller powered by the 12v battery. Even during pushing matches the VEX stayed powered.
Billfred December 4, 2006, 8:36pm #2

So now you’ve got me wondering: Which robot was this? I wanted to say 2003, but the wheels are different.

Under the hood there is very little, if any, difference between the Vex Controller and an FRC Controller.

Also, to add to what Art said, I think that was part of the whole off-season challenge. Making an FRC bot work off of a VEX controller.

We did this with our 2005 robot, the only problem with the VEX controller is it has no disable. You need to make sure your program can tell when the remote is off.

But, one awesome thing about the VEX control is you don’t have to lug around an OI. It makes the robot allot easier to DEMO, we plan to convert our 2006 robot to a VEX controller soon too.

So now you’ve got me wondering: Which robot was this?

Correct! This is our 2003 robot that has had several reincarnations. We also converted our 2001 robot to VEX to eliminate the OI. We take the robot to presentations and let elementary school kids drive so we decided that the VEX hand unit was better. This test bed was used to eliminate the VEX battery. We were also testing Colson wheels. They lost in a pushing match with this year’s robot.

We also built a hand switch to disable the robot during presentations. This was based off the original tournament controls from IFI and plugged into the tether port of the Operator unit. This way if the robot starts taking off, we shut it down.

im woundering what resistors you had used in this project, my team is wanting to do the same thing, Thanks!