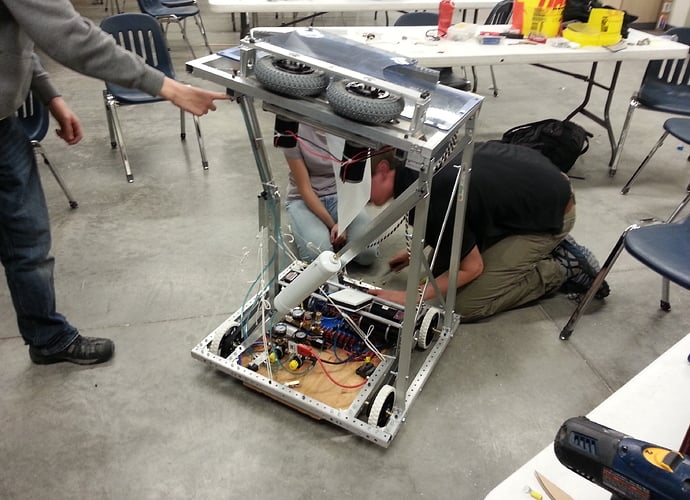 All that is missing is the hopper we finished today and second year rookie team 4057 has officially moved from pure defense to offense. No ground pickup on it, but since we wont move from the feeder station we didn’t feel it would be neccesary

Either way, it would be a pretty neat design if you could make full-court shots from the feeder station.

Looks Great, glad to see another second year team toughed it out. An accurate (80-90%) full court shooter would be great, I agree. How do you plan on negotiated the distribution of frisbee’s with the rest of your alliance? You may end up with 2 or three other non-retrieving shooters on you alliance. Would loading at the feeder and moving to a more accurate shooter location be more efficient scoring method if 2-3 of you team mates were doing the same thing? 4134 has been kicking around a lot of ideas , we can shot full court at 50-80 % in the 2 point goal, but 80-100% from the pyramid in the 3 point goal. We have no retriever , but have a reliable 10 point hanger.

we accounted for the angle by angling our shooter. the end has a bend in it, but I don’t remember the angle we set it to off hand though. With the ability to adjust the angle of our shooter we will also be a dynamic team able to move and score from multiple locations. Thanks to our team getting done with this a week early we have had some great time to test this out and find our sweet spots to shoot from. the Possibility of scoring in the top pyramid goal has also come up and it looks like it could be a possibility. Fingers crossed for that!

What do you weigh in at?

Any chance of adding a ten point passive hanger?

we are working on the 10 point hang. don;t know if we can fit a passive hang or not though. and we clock in at a staggering 88.5 pounds. blew us away how light we were. just means we get 30 pounds of dead weight to offset the shooter for driving.

but if things work out. we can score the pyramid goals, meaning we could wait for the last 20 seconds or so and instead of climb take a few more shots and maybe make 20 instead of 10 points.

but if things work out. we can score the pyramid goals, meaning we could wait for the last 20 seconds or so and instead of climb take a few more shots and maybe make 20 instead of 10 points.

you can score the colored frisbees into the pyramid goal at any time during the match though… so you could score them at the beginning of the match if you wanted, and then hang at the end.

Here is a link to this shooter in action:
http://www.youtube.com/watch?v=cNNyVM-Hs_I&feature=youtu.be

This is in our school’s hallway, but we have many witnesses to this shooter in action at a scrimmage put on in corvallis. We have a reliable 18 point autonomous mode working as well. This is just a simple demo of our reliability to shoot full court into the 2 point bin.