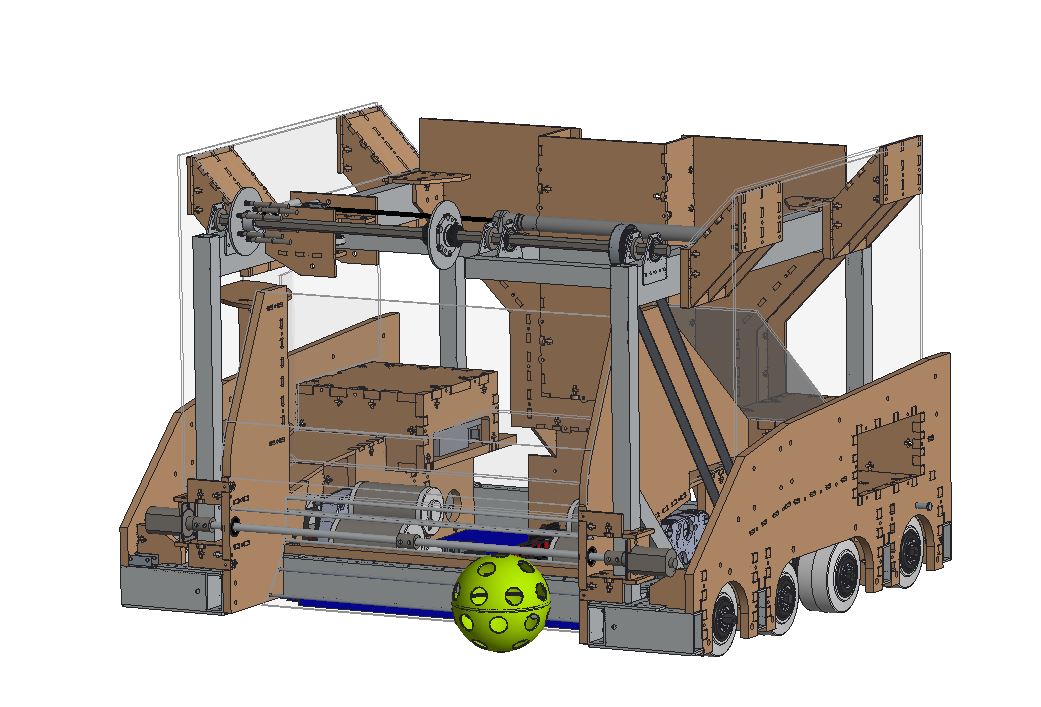 During the offseason I started using the wood assembly system in this paper from FRC Team 4183, The Bitbuckets for our robot. This system made sense for us to use thanks to our access to a laser cutter and CNC router, student CAD experience, and not a ton of funding.

The robot features a intake/outtake (only capable of feeding other bots for now), passive gearage, and climber. We are planning on playing heavy defense again this year with its VEXPro 6 CIM ball shifting drivtrain. (Our robot will weigh more than 80lb this year, I promise we wont have to be clamping steel vises to its base. Never again, never again.)

Would love to hear about what you’ve learned from building a plywood robot.

Proud to claim you guys as our Colorado brethren. Nice work! I kinda miss doing wood robots, maybe we will return to the fold someday.

Looks awesome! 1410 is excited to see you guys in CO again.

Cool design ! Do you have a PTO hanger from your drivetrain ?

Cool design ! Do you have a PTO hanger from your drivetrain ?

Yes, it is currently directly connected to the drivetrain with a belt.

Would love to hear about what you’ve learned from building a plywood robot.

It worked really well for us. It was really nice being able to design things without having to worry about if we could build them from 1" square aluminum tubing.

We are lucky in having access to a CNC router and laser cutter. It allowed us to use either .2" and 1/2" thick birch plywood depending upon the strength we wanted for assemblies.

Besides the CAD taking to long to complete, the biggest issue we ran into happened when we CNCed the 1/2 thick side parts. The end-mill we used was somewhere in the range of 1/64 smaller than what it was supposed to be. This meant that all of our slots were too small and our extensions too wide. We did a lot of sanding the next meeting.:]

Other than that it was simply CAD, cut, and assemble. I did the entire CAD, and since I am a senior, I don’t know if we will be doing the wood construction again. We will have to train some people between now and next season or move back to 1" square aluminum tubing.

Overall the wood assembly system resulted in what I feel is a much higher quality robot than we have ever built before. I am so glad you guys released your document which allowed us to try it out this season.