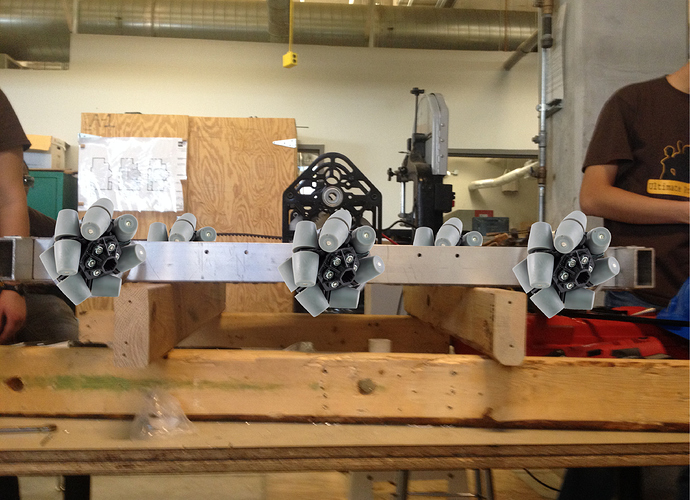 Parts arrived yesterday, and we are proud to present the first iteration of our innovative new West 'Canum Drive.

I call photoshop. The wheels are much clearer and less noisy than the rest of the image. Also, that doesn’t look like a useful wheel arrangement. What are you hiding?

Also, that doesn’t look like a useful wheel arrangement. What are you hiding?

I call Photoshop as well. I can tell.

I call Photoshop as well. I can tell.

We tested a 6wd mecanum west coast drive in the offseason, and I’ve got to say it surpassed our expectations in every way possible. The powerful maneuverability of the omni directional motion combined with the opposing directions of the extra pair of rollers providing extra pushing friction makes a drivetrain akin to swerve without the complexity. It’s a beautiful combination that I’m glad to see 1675 using this year.

You guys got your WCD DS gearboxes already? Not fair!!! Ours still haven’t shipped and we ordered them three days into the season

You guys got your WCD DS gearboxes already? Not fair!!! Ours still haven’t shipped and we ordered them three days into the season

If you email me, we can see whats going on.

I can confirm this is photoshop. I can tell by the pixels and by seeing many a shop in my time.

Also, this kind of reminds me of a certain 1625 robot…

If you email me, we can see whats going on.

Thanks, our head coach emailed vex (where we ordered them from) Thursday and they said that they would ship by the end of the week.
Of course, I don’t know if they’ve actually shipped yet…

Well, they decided that they didn’t want to lose any pushing power because they used mecanums, so they orientated the wheels at 45 degrees so that all of the force would be going straight forward and backwards. In regards to the belt, they originally planned on having 6 seperate gearboxes, but once they realized that their way of mounting the wheels made it so that all the wheels would always be running in the same direction, they got rid of 4 gearboxes and belted the wheels together in order to save weight.

Glad to see that you received your parts.

another way to prove that it is not legit, is that they would have realized that they installed them wrong.

You guys are good sports! We figured we would try something new for our 10th anniversary…6 mecanums was just too good to pass up!

Thanks! So far we are quite pleased. Rubber hits the carpet tomorrow…