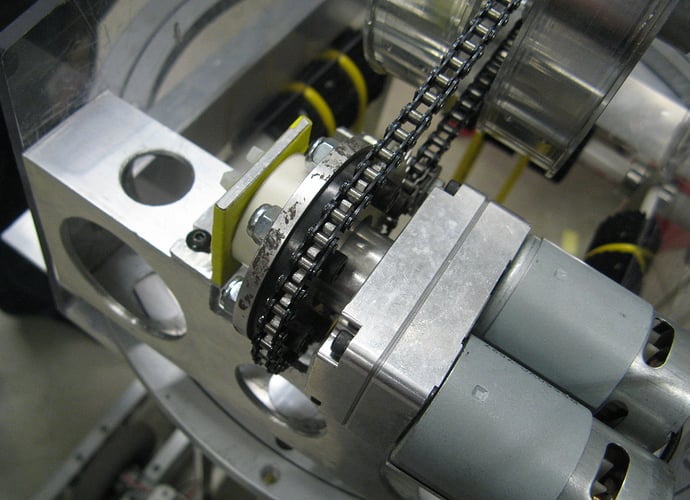 Official teaser for FIRST Robotics Team 1675 The Ultimate Protection Squad. Lots of new territory on this robot for our team. See it in action in Pittsburgh and Wisconsin.
safetycap_n111 February 15, 2012, 9:52am #2

Looks like part of a shooter/turret/flywheel assembly. And it looks good :D. Cant wait to see it in action.

Hope to see you guys at Championships.

Looks great 1675! What is the RPM on the flywheel? Are you using a hood on the other side?

Looking good. Based on what I see it looks like you will be using tread (roughtop/wedgetop, like that used on many teams wheels) for your shooter wheels. I would caution against this, using thread on a high RPM shooting wheel in my experience has a tendency to turn these balls (as well as the poofballs from 2006) into confetti.

Guys, you’re missing the most important part of the teaser. For the first time since 2006, 1675 is not using mecanum wheels.

In all seriousness, looks legit. In retrospect, the CIM-U-LATOR really is a perfect shooter gearbox.

I was gonna say, I saw those pneumatic wheels and I got all excited. Looks awesome, guys! It’s a shame that we won’t be at any of the same regionals this year.

and where is the famous brown and gold anodized frame I’ve come to know and love?

Thanks for the compliments, guys.

Tyler: RPM should be topping out around 6k. There is indeed a hood on the back side.

jwfoss: There will be no roughtop on the shooter. We haven’t fully decided on our tread material yet but our current options are doing just fine with no damage. As pictured, with no tread, actually works rather well! That being said, there is plenty of roughtop contacting the balls and its something we’re watching very carefully. So far the only peeling of the skin off a ball has occurred when feeding into a non functional shooter.

Re: mecanum wheels - just because you can see one wheel in the picture doesn’t mean you can see them all

Sadly there will not be any anodizing on this robot…however, when all is said and done, I am confident this will be one of our better looking bots yet. Very excited =)

See you all soon - debut is on Sunday at the Team 537 scrimmage.