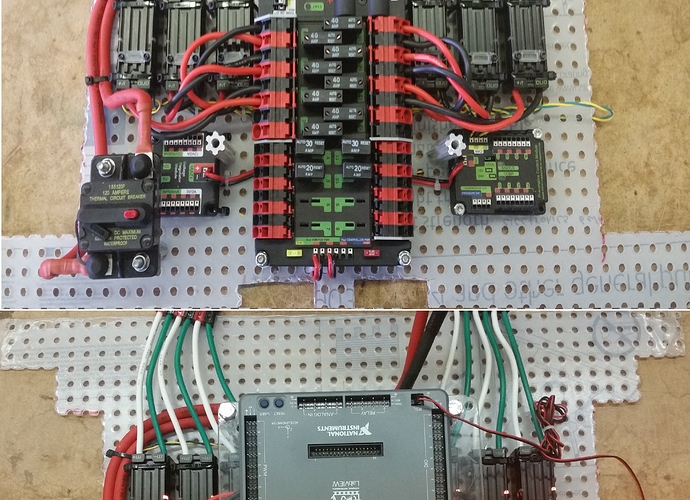 Competition electronics setup, tested and ready to drop in.
Due to similar size constrains as last years " low bar bot" we are stacking the Rio above the PDP again.
flemdogmillion January 1, 2019, 3:45pm #2

Do you mean the silicon/noodle wire on the SRX’s? From my experiences it works fine if you lift up the latch enough( a good sized screw driver or the AM Toothinator) can do the job.

The RoboRio is mounted on Lexan sheet 6 inches above the PDP. The PDP is easily seen from the sides. Currently the Lexan is bolted to the “churros” with 1/4 bolts which can be swapped out for quick release pins if needed.

Since most of the motor controllers are running CAN and the various sensors are controlled elsewhere, removing the RoboRio isn’t difficult.

We had this similar setup last year through two regionals and champs and never had to remove it for inspection. We also have LED’s specifically for the electronics area. Make inspection easier when everything is lighted.

As mentioned previously, the higher strand count wire isn’t that difficult to install in the PDP connectors… We found giving the ends a few twists with your finger to gather the stay wires and carefully opening the jaws wide enough. Takes some time and practice but easy enough.

I found if you have a smaller flat head screw driver when you open the jaws fully and with a slight push in, the screw driver will seat and lock jaws open.
I found this out a few years ago on the previous version, the PDB…
Even opened and tested on one of our dead PDP’s to verify it isn’t being damaged with this trick…

Practice a bit, its nice to have the hand free to guide those wires in.