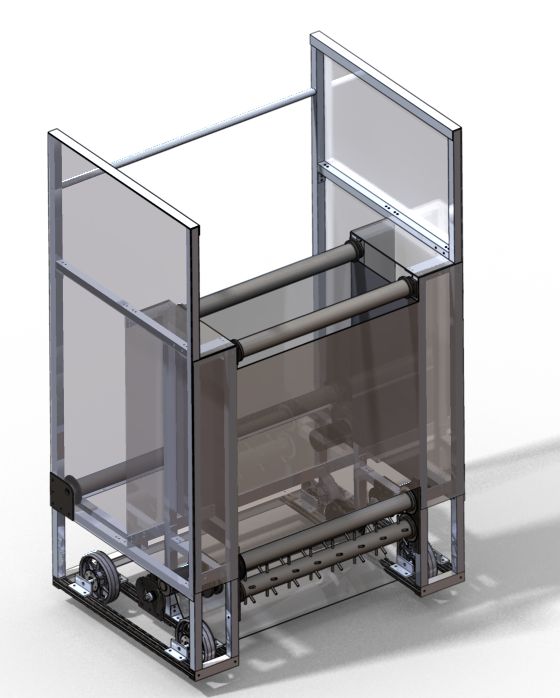 This rendering is from February 2, 2009 – a day after we decided to rebuild the structure above our drivetrain. Design is an iterative process, I’m told.

The CAD model isn’t complete, notably omitting the scoring mechanism. The rear of the robot will become a hopper that expunges the balls upward and forward, and while we have a rough idea of what it’s going to take to make that happen, the refinements are happening in the real world instead of in my laptop, so they’re not shown.

You know, I’ve heard that “Design is an Iterative Process” stuff before… but typically only when a lot of work is about to be (re)done.

You know, I’ve heard that “Design is an Iterative Process” stuff before…

I seem to recall a discussion like this with our student mechanical lead about a week and a half ago, when we discovered we couldn’t get balls to actually move from the harvester to the lift…

A phrase I hate hearing…

That looks very similar to what’s sitting in our shop right now…and even more uncanny we just decided to change our design last week. Our students are now getting a lesson in engineering on the fly!

That looks very similar to what’s sitting in our shop right now…and even more uncanny we just decided to change our design last week. Our students are now getting a lesson in engineering on the fly!

Great stuff!
Our team emphasizes the “continuous improvement”, “design is an iterative process”, “engineering is all about problem solving” type build season. It is a lot of fun and turns out a good product.

I feel proud when you can ask a student “so is it good enough?” and they’ll respond with a laundry list of things that we could try and experiment with to improve it. It does make those control guys kinda antsy though.

The story sounds familar. 2 weekends ago we realized our orginal structure wasn’t going to cut it. Hence, last week Monday we nearly started over with our design. After a week of hard work, we finished up our CAD this past weekend. Now, I quiver every time I open up our rev 1 design.

Thanks for sharing the comments on the “decided to redesign”. For a while I was thinking that we were behind schedule on build, seeing as how we have a frame, 1.5 “drive modules”, a control board awaiting wiring and a vague untested idea of how we are going to move balls around as of Feb.4… however I can take solace in the fact that we “decided to redesign” our scoring mechanism two weeks ago when we realized that our beautiful pan/tilt shooter that we initially planned was going to go beyond what this year’s team is capable of producing.

Fortunately we’ve been following a fairly “modular” design process this year, so the scoring mechanism is essentially a “bolt on” to the rest of the robot and… if need be, could be part of the 40 pounds of parts we bring to Seattle with us… but it would be really nice to have everything together for testing at some point before March 26th!

Good luck with the rebuild, you aren’t the only ones iterating!

Looks strikingly similar to our design this year, I think we will soon discover this type of robot to be one of the “staples” at every competition. Are you using toughboxes or customs for the drivetrain? I hope the next two weeks goes smoothly for you, post some pictures of the finished work please!

You know, I’ve heard that “Design is an Iterative Process” stuff before… but typically only when a lot of work is about to be (re)done.

I also remember the corallary:
“Better is the enemy of good enough.”

Anyway to those who did massive redesigns you’re ahead of when we sawzalled our frame last year to restart which would be roughly this Saturday.
We of course never did stop tweaking that robot until Atlanta because we can’t leave well enough alone.

It does make those control guys kinda antsy though.

I could tell you stories…

Eventually you have to shoot the engineers and ship the robot.

In our case, our fundamental strategy hasn’t really changed at all – just a lot of significant details in its implementation. As we worked through the design over the last several weeks, we made a lot of mistakes and changes and discoveries, all of which came with some number of band-aids and unplanned additions.

By starting over, we were able to take account of everything we’d learn and include all of the subsequents requirements in our design from the start. So, with some concessions to the design of the existing drivetrain, we’ve ended up with something that’s more robust, lighter and more successful in accomplishing what we intend to do. We put in two very long days over the weekend and are caught up again. With luck, we’ll be able to get the whole machine together by Sunday.

The robot is pretty simple, all things considered. The drive is 4WD with a single CIM on each side running through a custom gearbox. The overall ratio is 8.75:1. The intake roller has pneumatic tubing bristles that and a quarter round backing that bring the balls up to the conveyor system. The conveyor system consists of a pair of individually driven belts – each powered by a FP motor, AM Planetary and the same gearbox we’re using on our drive. Not shown is a flap at the top of the conveyor that will push the balls back into the hopper as the come out of the belting. That flap is “normally-closed,” such that it covers the belting when we dump balls out.

The hopper can store ~15 balls and measures 14" x 35" x 24" or so. We’ll get balls out by raising the height of the floor, essentially, and pushing the balls upward. They then roll over the flap mentioned above and into the opponents goal. The plan, of course, is for this to happen as quickly as possible and so that mechanism is driven by the remaining two CIMs, again through the same gearboxes as those on the drive.

Also, for the record, I don’t advocate shooting the engineers.

I count 6 cims in your design?

I count 6 cims in your design?

All of the gearbox assemblies have a CIM in them by default and it looks like I didn’t change the configuration of the conveyor belt gearboxes to show the FP motors with AM planetarys. The robot has only 4 CIMs.

Are you guys using a standard four wheel tank drive?

Are you guys using a standard four wheel tank drive?

Yes, simple four-wheel drive with traction control of some variety or another thrown in the mix. It’s nothing quite as fancy as your crab drive.

can it rotate w/ the trailer attached