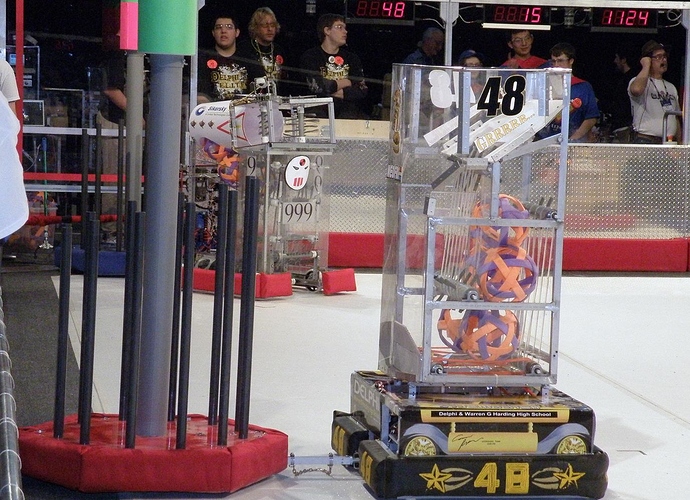 Team 48’s robot xtremachen12 waits for a match to begin at the Connecticut Regional.

I wanted to post a fresh pic to show that we do, in fact, collect moon rocks from the floor now - see the diagonal orange belts under the hopper? We load through the hopper floor. Our human re-loading efficiency also improved quite a bit in CT - 48’s ranking score was thankful for this.

Astute observers may note 2 interesting things about this picture, both related to the same individual…

See you all in Atlanta - best of luck to all competitors!

And lest I be labeled a hypocrite - this photo is courtesy of Bob Jadloski.

I thought something looked different on the webcast. Floor loading is a good move for you guys. See you in Atlanta.

And he’s in the background too!

i actually think that is a reflection though

i actually think that is a reflection though

No, that’s actually where he was standing for most of the day Friday at the regional. I was on field reset in that red corner next to 48.

Team 48, thanks for coming out to CT to play with us! It was nice to see some new faces at the regional this year. Congrats on all the awards!

I have to agree with her, congrats on all the awards and it was amazing getting to play with you guys and we were even more amazed to see that we were able to pick you guys cause your robot is AMAZING!