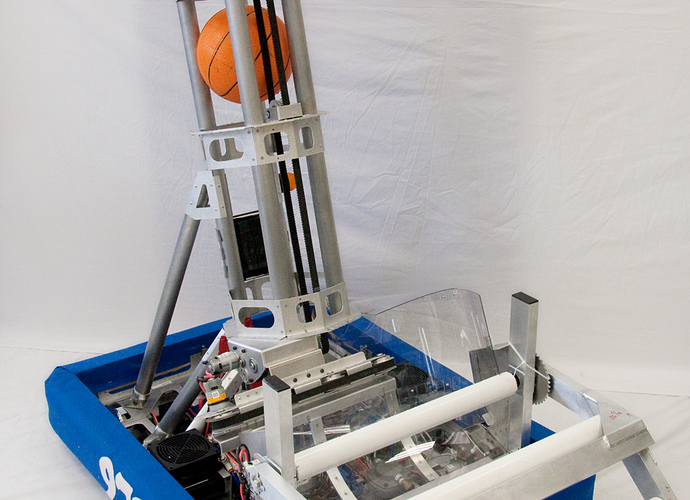 Team 971 Spartan Robotics is proud to present their entry for Rebound Rumble: Renegade

Specs:
-All new sheetmetal chassis with just 3 major parts, weighing only 12 lbs.
-Belt driven 6wd, 16/7 fps 2-speed transmission
-Over-bumper pickup and belt driven ball path. ~1 second from a ball touching the intake to the top of the shooter
-Intake doubles as bridge manipulator, capable of producing 120lbf at the end
-Hopper (not pictured) for collecting from the inbounder station and other robots
-Low bumpers to assist in pushing matches and prevent inadvertently driving over balls
-Pneumatically powered drop-down skids lift up the front of the robot for crossing the bump
-Low CoG, just 8" above the floor
-2-position hood for fender shooting and long distance shots
-Automatic ball indexing with banner sensors
-Several custom circuits including a FitPC for faster vision processing and code updates, a custom gyro board for high-speed gyro feedback
-Shooter wheel spinup from dead stop to shooting speed in 1/4 second with no overshoot

We’ll be competing at Sacramento this weekend, watch us on the webcast (if there is one)! There are a lot of cool features not mentioned here, so make sure to stop by our pit at any of our events and check it out.

Scott “Scooter” Bahl will be behind the glass at Davis for his fourth and final year, joined by Douglas “Xbox” Baney, the freshman who drove 971’s second robot at Madtown Throwdown.

Many thanks to everyone who contributed to this design, especially 254 for their generous use of their lab and field, as well as RC and Adam Heard.

Wow. Wow wow wow wow wow. This thing is just AWESOME! I expect no less from former world champions, but this is still just awesome! Great job 971! You always make some of the best machines in FIRST each year, and this year is no different!

See you in SVR!

We also worked to make new wheels this season, to complement the new drivetrain.

Thank you to RC for machining these. They turned out great (so far). Not for Sacramento, unfortunately. I’ll try to do a pre-SVR or pre-Champs video. They only finally captured footage for a video at last night’s driver practice, but they weren’t able to get it to me in time to edit it down. I still don’t have it (I still haven’t even seen this thing run in at full capacity!). If there’s no webcast of Davis, I’ll make sure we release something before SVR.

Looks incredible, thank you for such a beautiful machine. Best of luck in Sacramento.

At one point during our season I was thinking about an under the bumper intake based on all the reports of balls getting stuck under robots, but I wish I thought more about an over bumper design. That would leave so much more space for electronics and simplify the frame.

Looks incredible, thank you for such a beautiful machine. Best of luck in Sacramento.

The recent driver practices have shown the robot works excellently! 971 is going to be a strong contender at SAC and SVR. IMO It will win them both, as the alliance captain.

I really like the way this robot serializes balls, I’m going to have to keep that in mind for future games… and the rest of the robot is pretty awesome as well.

Saw this beauty a few weeks ago and I really like what you guys did. Scott seemed very excited about being behind the sticks yet again and I am sure he will go out with a bang this year. Can’t wait to hear how you preform this week in Sacramento! Good luck!

Thanks for the compliments Akash, the team is really proud of this one. This is the best picture of the transmission I could dig up is here.

There may be some better pictures that surface later, but the whole thing is buttoned up pretty tight, so it’s a little hard to see what all is going on inside.

I don’t know the final weight offhand (one of the students can probably weigh in on this), but this is a nice picture of our driver, Scott, holding up the frame with one hand.

That is one good looking, and sounding, robot. I really like the speed and control you appear to have in the driving videos.

good luck at your competition.

Elegant indeed! Everything is super streamlined, though I’m a tad confused about why you feel a need to cool your CIM’s that much. Your new wheel design looks really great as well; zipties make for a pretty nifty way to replace tread.

I look forward to seeing you guys at SVR! It’s going to be a fun year competition

Elegant indeed! Everything is super streamlined, though I’m a tad confused about why you feel a need to cool your CIM’s that much. Your new wheel design looks really great as well; zipties make for a pretty nifty way to replace tread.

I look forward to seeing you guys at SVR! It’s going to be a fun year competition

We cooled the CIMs in a similar manner last year. It helps us practice longer and drive longer, really. The motors get quite hot. The way our driver drives, you would want fans on the CIMs.

The extended runtime is useful when we have a high match turnaround (practice rounds, elims, etc)

I’m a tad confused about why you feel a need to cool your CIM’s that much.

The team noticed in 2010 (the first year we ran with these speeds on the driveline) that during the quick turnarounds in eliminations, the motors started to get quite hot, and became much less efficient. I believe they were noticing battery voltage drops towards the end of every match. The driveteam took to fanning the motors between each match. They added the fans after the season, and saw a measurable improvement, especially at demos. Our robot last year used the fans as well, and they feel it’s been very beneficial. Somewhere on CD is another post explaining this (by either Austin Schuh or Scott Bahl, IIRC).

I think that’s all correct. One of the students could probably answer this better, but I think they’re all busy packing and driving to Sacramento right now. I’m sure they’ll add more detail later.

As a long distance mentor, I don’t get involved in all the details of the robot, although I do know most of it. I’ve challenged the students this year that by the time they get to Championships (the only tournament I can attend with them) that they all know more about the robot than I do. Most of them are already there :D.

Here’s a link to Austin’s post last year regarding the fans. 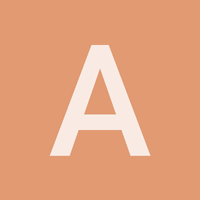 The claw is currently out of the frame perimeter, but not by much. It’s easy to extrapolate where it would be inside the frame perimeter. CAD claims it weighs 110 right now with batteries and bumpers. I bet it’ll creep up to 120 - 125 lbs. We’d...

When turnaround time is faster during matches (practice rounds, elims, etc) the fans have their largest effect.

Thanks for the compliments Akash, the team is really proud of this one. This is the best picture of the transmission I could dig up is here.

Wow, that’s a well done transmission! How did you mount the two gears to the CIM? Did you use the AM 8mm to Hex adapters, or broach your own gears? That’s certainly a elegant way to get shifting with minimal complexity. By the way, are the center wheels direct driven?

How does the belt drive work for you? Was it hard to do? If so, was it worth the difficulty?

How does the belt drive work for you? Was it hard to do? If so, was it worth the difficulty?

We’ll see how it holds up at Davis. It has been working pretty well thus far after the drivetrain was tuned.
The timing belt drivetrain is nice, but it’s best to run force calculations to see how it’ll hold up. Belt doesn’t stretch like chain does, and its quieter and a bit more efficient. It is also lighter. This, coupled with the fact that we have 2 inch wheel means we should be able to get to where we want to go on the field.
The extra traction is useful going up the bridge.

I think you realized this already, but we put in a horizontal conveyer to help sort the balls. Since we were going with ~24 in intake, we needed a way to rapidly get the balls into a column/row/whatever. Once organized, we can pretty easily get the balls into the tower. The vertical belt then runs at the same time as the shooter wheel, and presto, we shoot (and hopefully score).

Below is a picture of the conveyor. 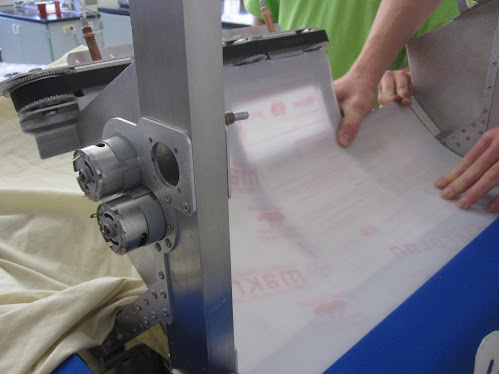 The team spent several days prototyping this. Inevitably, a ball would get stuck somewhere. We configured it with the intake, then make sure we had accurate measurements in the CAD that were the same as the working prototype. Since it was such a key part of our game, we spent a lot of time on this.